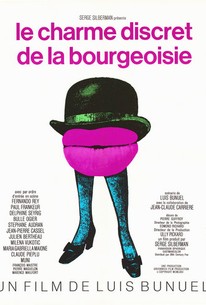 In typical Luis Buñuel fashion, The Discreet Charm of the Bourgeoisie surrealistically skewers the conventions of society. Buñuel applies his surrealist touch to a mundane event: a dinner party that may never come to pass. A group of well-to-do friends attempt to gather for a social evening, but are thwarted at every turn. The initial problem seems to be a simple scheduling mistake, but the obstacles become more and more bizarre. At one point, the guests are interrupted at the table by an army on maneuvers. Later they learn that they are merely characters in a stage play and so cannot have dinner together. These misadventures are combined with symbolic dreams of the various characters, some of which also involve interrupted dinners. Wicked social satire and one of Buñuel's funniest films. Winner of the Academy Award for "Best Foreign Film" in 1972. ~ John Voorhees, Rovi

Michel Piccoli
as Minister of the Interior

Milena Vukotic
as Ines the Maid

Maxence Mailfort
as Sergeant who recounts his dreams

I had forgotten just how spooky the dream scenes are; Bunuel could have been a master of horror, or a great farceur. As it was, he was simply Bunuel, which is cause enough for celebration.

Dreams nest within other dreams like so many Chinese puzzle boxes, while no dream belongs exclusively to a single dreamer, as though Buñuel were toying with the Jungian notion of the collective unconscious.

An exotic and brilliant hothouse flower of a film.

Manages to be totally surreal yet totally approachable. Quite amazing.

Luis Bunuel's The Discreet Charm of the Bourgeoisie is a deliciously pungent concoction by the 72-year-old filmmaker and his young co-scenarist, Jean-Claude Carriere, that will set your spirits soaring and your mind aglow.

If you've never been a Bunuel film, this is a fine one to start with; Luis Bunuel is one of life's great originals and he's in top form here.

Triggered by minor annoyances, the dreams and memories of civil servants invade the lives of Buñuel's upper-class characters whenever they sit down to eat.

I must assure you that, such is Buñuel's wizard command of cinematic juxtapositions, the proceedings are delightfully clear, as well as light and witty.

There is one clear target for Buñuel that crosses all ideological lines: hypocrisy

A surrealist comedy of discreet humor that will probably not make you laugh as much as you will feel embarrassed for all of its petty bourgeois characters, and once again Buñuel smartly plays with his film's structure, this time to cast a slyly provocative and cynical view on society.

If you have no sense of humor going into this, you wont get it at all. This film has a non-linear narrative where things just happen for the sole purpose of exploring the discreet charm of the bourgeoisie which the title tells us it's about. In other words it's a social critique of the upper classes. The way they react and behave in the situations in the film is very funny. I recommend this movie.

Luis Buñuel is an acquired taste that I sometimes have trouble acquiring. His films can be a little cryptic and transcendent (or confusing and pompous - depending on your point of reference). The Discreet Charm of the Bourgeoisie is an exercise in precise meandering that will either pull you along by your belt loops or leave you standing befuddled in its wake.

The mere title of this satiric view of the upper crust spells out Luis Bunuels surrealistic take on the subject of the rich and particularly petty: the bourgeoisie. Supplementing an interesting cast with a cynical stance, Bunuel spices up the tragic circumstances of lust, greed, and sloth with gorey and/or unobtrusive dreams which are basic human fears and people's undoing. Eclectic, but not particularly funny, it's not only a piece of art, but a interest propaganda film on what's acceptable in our society.