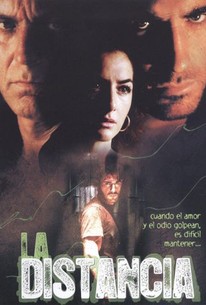 In first-time director Inaki Dorronsoro's explosive drama La Distancia (AKA The Distance, 2006), Miguel Angel Silvestre plays Daniel, and up-and-coming pugilist repeatedly on the verge of winning, but never quite able to cross the victory line. The frustrated Daniel commits a robbery that leads to incarceration. In jail, he meets Guillermo, a cop with suppressed gay urges and self-destructive impulses, who cons Daniel into committing a homicide in exchange for release. Daniel then emerges from confinement, ostensibly unscathed but racked and torn apart inside by guilt. He climbs back into the ring, but is horrified to discover that aggression and anger now guide his boxing maneuvers, and, to clear his conscience, decides to seek out the wife of the man he killed, who works as a prostitute in a local club. Meanwhile, a horrified Guillermo learns of Daniel's decision and does everything in his power to stop the young man from continuing down this path.

José Coronado
as Guillermo
View All

Critic Reviews for The Distance

There are no critic reviews yet for The Distance. Keep checking Rotten Tomatoes for updates!

There are no featured reviews for The Distance at this time.