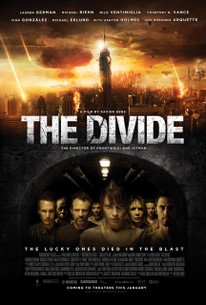 In this graphic and violent, post-apocalyptic thriller, nine strangers-all tenants of a New York high rise apartment-escape a nuclear attack by hiding out in the building's bunker-like basement. Trapped for days underground with no hope for rescue, and only unspeakable horrors awaiting them on the other side of the bunker door, the group begins to descend into madness, each turning on one another with physical and psycho-sexual torment. As supplies dwindle, and tensions flare, and they grow increasingly unhinged by their close quarters and hopelessness, each act against one another becomes more depraved than the next. While everyone in the bunker allows themselves to be overcome by desperation and lose their humanity, one survivor holds onto a thin chance for escape even with no promise of salvation on the outside. -- (C) Anchor Bay

Courtney B. Vance
as Delvin

Seun Olegunju
as Tenant
View All

News & Interviews for The Divide

View All The Divide News

Critic Reviews for The Divide

Gens' film, while a far darker vision of the day the world ends, is more sexually sordid than satisfying. Save the humans? Why bother?

Its nihilism feels cynical rather than authentically bleak, and the increasingly histrionic scenes start to resemble an indulgent actors' workshop that has spun out of control.

Michael Biehn and Rosanna Arquette are in the cast but not helped by a cursory screenplay.

No one has any goals other than to be the most annoying person in the room and there's plenty of competition in that department. It's a waste of a good setup as the situation and location are well drawn.

Nasty, unrelenting and likely to make your hair fall out.

this uncompromising, unapologetically unpleasant addition to the post-apocalyptic subgenre invites us, along with Eva, to bear witness to the end of everything that we take for granted and hold dear, with all sentiment and hope forever locked out.

While not an easy movie to watch, it is a movie that deserves to be seen, if for no other reason than so that all of us can decide whether or not the lucky ones died in the blast.

The one valuable lesson gleaned from The Divide? We learn a multitude of new uses for duct tape! However, one of them should be to seal the film canisters of The Divide shut to save you from seeing it.

It will take someone without much humanity at all to enjoy this film.

At its best, The Divide is creepy and claustrophobic, but it never rises to the level of being truly engaging or scary.

With so many varying elements, it ultimately fails to make good use of any, be it the nuclear fallout, sociological breakdown or governmental, scientific experiment angle tantalisingly thrown in but never made full use of.

Ultimately the main problem with The Divide was the characters. If you're going to set your entire movie in a single room, you need interesting relationships to make the story pop.

Audience Reviews for The Divide

To survive the end of the world you must first survive each other. Great Film! The performances felt real. The mood was perfectly dark and doomish. This post-apocalyptic take on humanity is not the most positive, but it is positively one of the bests! The cinematography and few special effects are good, especially for the budget. The story with its sci-fi elements briefly introduces a world of wonder, before shutting the door closed on hope and humanity. It is saved by sparkles of effective comedy, but transgresses into a struggle to survive at any price. What is there left? Humanity? Dignity? Love? Compassion? Not really. As dark is it it, this vision hopefully encourages us to do better in our own lives. No need to wait for a nuclear explosion to figure out what is our desired behaviour for betterment. Totally worth watching!!! In this graphic and violent, post-apocalyptic thriller, nine strangers-all tenants of a New York high rise apartment-escape a nuclear attack by hiding out in the building's bunker-like basement. Trapped for days underground with no hope for rescue, and only unspeakable horrors awaiting them on the other side of the bunker door, the group begins to descend into madness, each turning on one another with physical and psycho-sexual torment. As supplies dwindle, and tensions flare, and they grow increasingly unhinged by their close quarters and hopelessness, each act against one another becomes more depraved than the next. While everyone in the bunker allows themselves to be overcome by desperation and lose their humanity, one survivor holds onto a thin chance for escape even with no promise of salvation on the outside.

"To survive the end of the world you must first survive each other." Survivors of a nuclear attack are grouped together for days in the basement of their apartment building, where fear and dwindling supplies wear away at their dynamic.

REVIEW
The Divide begins at the instant a nuclear missile hits a city. Some occupants of a building run into a basement and hide from the carnage. From this point on these survivors begin their descent into a hell of their own making as madness and primal aggression take hold. This is a pretty unpleasant film to tell you the truth. The levels of degradation that the people in the bunker resort to is fairly grim. Physical, verbal and sexual violence all manifest themselves as these survivors lose touch with their humanity. They are not a particularly nice bunch of people to begin with, so this does pose some problems for us as an audience empathizing with any of them. Nevertheless, the film does generate quite a bit of suspense and there are some very unpleasant moments of nastiness. So it does work in a brutal in-your-face kind of way. And this is the movie's chief selling point. While the setting is almost exclusively limited to the bunker, there is one unusual moment where one of the survivors is able to exit the confines of the building and come briefly into contact with the enemy. It's a very bizarre sequence where the mysterious bad guys appear to be storing children - one of which they earlier snatched from the bunker - in incubators. The children look either dead or blinded. It's horrific and utterly strange. Immediately after this the mysterious enemy weld our heroes back into their bunker and are never seen again. After this point the microcosm of the bunker just goes from bad to worse, as some inhabitants go mad and others sadistically insane. Overall, The Divide is a nasty movie with a very pessimistic view of how life in these extreme conditions will play out. If you like apocalyptic films on the more grimy and violent side of the spectrum then this is one to see.

Clocking in at over two hours, The Divide is a vicious horror film. It's premise is simple enough. Nine tenants of a New York apartment complex narrowly escape a deadly nuclear blast by finding their way into a bomb shelter built by their paranoid, ex-Marine superintendant. Whatever caused the total decimation of New York City is never explained, but the focus of the film isn't on the outside; it's on how the nine characters deal with living in an enclosed space with food quickly running out and madness slowly seeping in. As is typical with films like this, The Divide runs with the cliche idea that without rules and civilized order, people will eventually start killing each other for personal gain, the strong or most fearful will prevail and the weak will perish. Every character is as diverse as the next one, so there are plenty of different types of characters to identify with, most notably the heroine Eve (yes the Biblical reference is obvious), played by Lauren German. Not once does this girl make an immoral or selfish decision. And everyone else has a mix of good and evil attributes that will soon enough spark an all out war between them, leaving Eve with the realization that at least outside, she has a chance at surviving. Yes, you've seen this movie before. Lord of the Flies covered this ground quite well, as did The Beach and almost every zombie movie you've seen. But The Divide isn't as bad as you might think. I for one was never bored. I didn't predict where the story would go in terms of who would turn on who, or just how atrocious some of these people become. It's true that in times of crisis, you never know how people will react over time, and I was able to buy most of the plot twists and character developments. I also really liked Michael Biehn in this movie. His portrayal of Mickey is pretty much Cpl Hicks if he returned to Earth, couldn't adjust to ordinary mundane life, and became a paranoid, creepy old man. So The Divide is pretty familiar territory, but at least it gets the formula right. There's enough here to scare, disturb, and entertain.