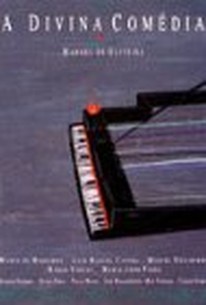 In this symbolic and philosophically weighty film, all of the inhabitants of a Portuguese mental asylum suffer from religious delusions of one kind or another -- even the cynic who denies the value of any religions at all. One couple re-enacts the story of Adam and Eve in the Garden, and then the woman who played at being Eve plays at being St. Teresa de Avila. Another man thinks he's a character from a Dostoyevsky novel, and yet another claims to have in his possession a fifth gospel from the Bible. Everyone has a point of view and is not shy about stating it, defending it in debate with the others with great sincerity, though (the reviewers claimed) with very little elegance or wit. ~ Clarke Fountain, Rovi

Luís Miguel Cintra
as The Prophet

Mário Viegas
as The philosopher

Ruy Furtado
as The director

Critic Reviews for The Divine Comedy (A Divina Comédia)

There are no critic reviews yet for The Divine Comedy (A Divina Comédia). Keep checking Rotten Tomatoes for updates!

There are no featured reviews for The Divine Comedy (A Divina Comédia) at this time.