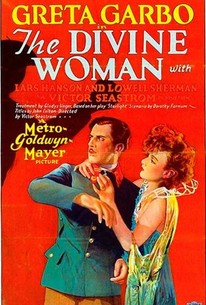 One of the great directors of the silent era, Victor Sjostrom, teamed with fellow Swede Greta Garbo for this drama. The great Garbo plays Marianne, a young woman from Brittany who was neglected by her impoverished parents. Marianne longs to be an actress and moves to Paris, where theatrical producer Henry Legrand (Lowell Sherman) takes her under his wing; Henry was romantically involved with Marianne's mother years ago and feels a semi-paternal affection for the young woman. Marianne falls in love with Lucien (Lars Hanson), a man who has deserted from the Army and is on the run from the law. To prove his devotion to her, Lucien steals a dress for Marianne, but this only attracts the police and Lucien winds up in jail. With Lucien behind bars, Henry's attentions become less friendly and more romantic, and Marianne must decide if she should wait for the man she loves or devote herself to the man who wants her. Sadly, no complete prints of The Divine Woman are known to exist; one reel of the eight-reel feature was discovered in a Russian film archive, but the remainder of the picture remains lost. ~ Mark Deming, Rovi

Paulette Duval
as Paulette
View All

Critic Reviews for The Divine Woman

The Divine Woman is another vehicle for the extraordinarily tempestuous passions of Actress Greta Garbo.

There is considerable comedy besides the hefty emotionalism at the critical turns of the action. The photography is perfect and the scenic ambitions seem directed at realism rather than magnificence.

Greta Garbo's latest picture, The Divine Woman, has some well-staged scenes, but it is more often than not weakened by an absence of spontaneity and also because of a tendency toward hysteria in the more emotional sequences.

In every detail, Miss Garbo presents with tho utmost truth to life the temperament of the born actress, in real life, highly-strung, egotistic, and subordinate in everything to the demands of tho theatre.

Seastrom's handling of it does make it fairly interesting but seldom truly absorbing.

[It's] well worth your while to see this production.

Supported by a cast that is well-balanced [Garbo] makes this orthodox story of a warped romance that comes out of the clouds into the strong sunlight of happiness, a work of real consequence.

One or two flashes of good contrast throughout the picture showed the direction of Victor Seastrom, but generally The Divine Woman is anything but that.

Greta Garbo goes over. The story of the picture and the role she plays are hard, and with almost any other star and any other director there would be a slight flatness at least.

There are many tense emotional scenes in the story of the rise of a country girl to the heights of stagedom.

There are no featured reviews for The Divine Woman at this time.