The Diving Bell and the Butterfly2007

The Diving Bell and the Butterfly (2007) 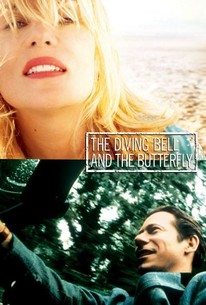 The Diving Bell and the Butterfly Photos

The astonishing true-life story of Jean-Dominic Bauby -- a man who held the world in his palm, lost everything to sudden paralysis at 43 years old, and somehow found the strength to rebound -- first touched the world in Bauby's best-selling autobiography The Diving Bell and the Butterfly (aka La Scaphandre et la Papillon), then in Jean-Jacques Beineix's half-hour 1997 documentary of Bauby at work, released under the same title, and, ten years after that, in this Cannes-selected docudrama, helmed by Julian Schnabel (Basquiat) and adapted from the memoir by Ronald Harwood (Cromwell). The Schnabel/Harwood picture follows Bauby's story to the letter -- his instantaneous descent from a wealthy and congenial playboy and the editor of French Elle, to a bed-bound, hospitalized stroke victim with an inactive brain stem that made it impossible for him to speak or move a muscle of his body. This prison, as it were, became a kind of "diving bell" for Bauby -- one with no means of escape. With the editor's mind unaffected, his only solace lay in the "butterfly" of his seemingly depthless fantasies and memories. Because of Bauby's physical restriction, he only possessed one channel for communication with the outside world: ocular activity. By moving his eyes and blinking, he not only began to interact again with the world around him, but -- astonishingly -- authored the said memoir via a code used to signify specific letters of the alphabet. In Schnabel's picture, Mathieu Amalric tackles the difficult role of Bauby; the film co-stars Emmanuelle Seigner, Marie-Josée Croze, Anne Consigny, and Patrick Chesnais.

Lenny Kravitz
as Himself

Azzedine Alaia
as Himself

Michael Wincott
as Himself

Jean-Baptiste Mondino
as Himself

Farida Khelfa
as Herself

Sara Séguéla
as Paraplegic at Lourdes

Critic Reviews for The Diving Bell and the Butterfly

What's fascinating is that it is the very restrictions the story imposes on a director that allow Schnabel to turn it into such an eerie stunner of a movie.

Nothing in director Julian Schnabel's career so far has anticipated the sweetness, sadness, maturity and restraint of this lovely movie.

The Diving Bell and the Butterfly is one of the best movies of 2007, but I'd argue it's also the one most in tune with what this season of goodwill and tolerance is supposed to be all about.

A poignant reflection on what it means to be alive and, visually, a true cinematic experience.

An exquisite metaphor for the redemptive power of cinema. Without an ounce of cheap sentiment, this true story is as profoundly moving and dreamily beautiful as any film in recent memory.

Never stoops to audience manipulation, it simply presents the story in a simple, heartfelt way and allows the viewer to follow their own feelings rather than have the filmmaker try to tell them how they should be reacting.

About as stunning and moving as a film can get.

Is not only fascinating, it's a great movie. [Full review in Spanish]

About the life of one man whose imagination took flight even when his body could not follow.

A work of art. A celebration of life and hope. A testament to the human mind.

One of the most visually original films in recent memory, and one that features just as much substance as style.

Audience Reviews for The Diving Bell and the Butterfly

One of the most stunning emotional knockouts recorded in cinematic history concerning an editor (Mathieu Amalric) who suffers a massive stroke, but remains determined to write his memoirs of his experiences through communicating with the only part of his body that isn't paralyzed, one of his eyes, to an aide. What director Julian Schnabel has constructed is an unnerving, extremely personal masterpiece in struggling to overcome an affliction, and the self-doubts, guilt, anger, and fleeting hope one encounters along the way. The acting is very good, although that is not what is most impressive about the film, which is how it is told through Amalric's character's perspective, showing just how much of a struggle something like this can be. While it is relentlessly sad, it is powerful and incredibly moving all the way through. This is a movie that should be a must-see for anyone who knows someone dealing with a stroke or some other kind of physical ailment. It does a flawless job capturing the emotional cycle and inner-thoughts of someone who deals with it, somehow, someway.

Bold first-person film-making reigns in this true story that reminds us that our lives can be changed completely at any given moment: a well-to-do magazine editor suffers a stroke and becomes paralyzed save for the blinking of one eye. Through a therapist's inventive solution - a board of letters starting with those most commonly used - he learns to communicate by answering yes or no to the letters, and thus writes his autobiography. Bit of a one-note film, overall, but touching and shot in creative manner true to the source's autobiographical nature.

Terrific! That's the thing I was talking about!

Based on his memoirs of the same name, this is the story of Jean-Dominique Bauby, the one-time editor of Elle Magazine who, after a debilitating stroke, became the victim of Locked-In Syndrome- a condition where he was unable to speak, and the only parts of him that worked were his mind and his left eye. To communicate he was forced to slowly and painstakingly blink as people read off the letters that he wanted to use to form sentences. It sounds very tedious and awful, but he manged to write his memoirs using that method, so that is definitely a testament to thew strength of determination and will power. This is a depressing film, but it's not nearly as depressign as I figured it would be. I think it's actually a lot more beautiful and filled with hope and enlightenment, so that takes the edge off. That, and the superb way the story is told gives you more to think about, letting you focus more on how they did it instead of the tragedy of the situation. Schnabel and Janusz Kaminski (the dp) do an excellent job of telling the story, mostly by showing it from Bauby's POV. This is done with unique camera placements, double exposures, and all sorts of cool lenses and other effects. From visual and technical perspectives, this is a real masterpiece. The audience gets to experience things from how Bauby did, and, while it is harrowing it times, you really gain a ton of respect for the man. Besides all the neat techniques, this is still a wonderful piece of work. It's got wonderful cinematography overall (not just he POV stuff), a great story, and some terrific performances, espeically Amalric. This is one of those cases where the fiulm is so dependent on the lead role to carry things that, if he fails, the film fails. Thankfully, Amalric knocks it out of the park. It's a shame he got snubbed at some awards ceremonies though, because he has one of the most challenging and unglamoruous roles here. He was very brave to take this one on, and I have really come to love him as an actor as a result. Give this film a shot. Yeah, it's kinda bleak, and arty, and a bit pretentious, but it really is touching, inspiring, and one hell of a cinematic achievement.

The Diving Bell and the Butterfly Quotes