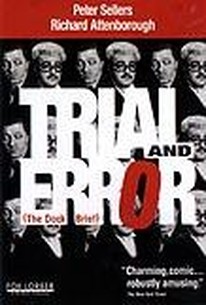 Fowle (Richard Attenborough) is a mild mannered seller of birdseed who is being driven crazy by his wife's offbeat sense of humor. When she fails to run off with their tenant, he murders her to have peace and quiet. He is arrested and readily admits to the killing. Morgenhall (Peter Sellers) is the attorney of dubious ability who is selected to defend the self confessed murderer. In Fowle's jail cell, client and attorney rehearse, examine and prepare for trial. The accused continually punches holes in the defense techniques proposed by the vapid attorney. The murderer plays devil's advocate to his defender and acts out the parts of judge, jury and character witnesses. The two go into the courtroom where Morgenhall's defense falls apart like a house of cards. Although convicted, Fowle catches a break when the judge determines his lawyer is extremely incompetent

John Waite
as Clerk of the Court

Richard Attenborough
as Foreman of the Jury, Fowle, Judge, Member of the Public

David Drummond
as Policeman
View All

Critic Reviews for The Dock Brief

There are no featured reviews for The Dock Brief at this time.