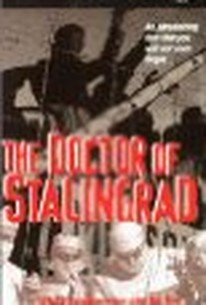 Der Arzt von Stalingrad (The Doctor of Stalingrad) was one of four films directed in 1958 by the prolific Hungarian-born helmsman Geza von Radvanyi. Set in a Russia POW camp during WII, the film concentrates on an imprisoned German doctor, played by O.E. Hasse. Denied sophisticated surgical tools, the doctor relies solely upon his medical skill to pull his patients through. He manages to win the confidence and respect of his Soviet captors when he removes a brain tumor from the son of the commandant. Less happy are the results of a wartime romance between the doctor and a female Russian physician. Though not altogether sympathetic to the Russians, neither can Der Arzt Von Stalingrad be considered 100% pro-German. ~ Hal Erickson, Rovi

There are no critic reviews yet for Der Arzt von Stalingrad (The Doctor From Stalingrad). Keep checking Rotten Tomatoes for updates!

There are no featured reviews for Der Arzt von Stalingrad (The Doctor From Stalingrad) at this time.