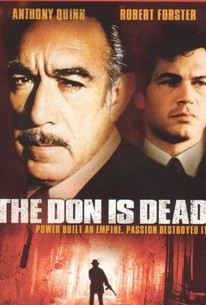 The Don Is Dead Photos

In this organized crime drama (one of many that came in the wake of The Godfather), Frank (Robert Forster) is the son of a mafia kingpin. He puts together a heroin deal with the assist of brothers Vince (Al Lettieri) and Tony (Frederic Forrest), but realizes that a snitch is present when gunmen burst in and interrupt the drug deal. Shortly thereafter, Frank's father dies. The old man's rackets get divided between two mob families, one headed up by Don Angelo (Anthony Quinn) - but Vince and Tony refuse to follow Angelo's leadership. In the mean time, mob accountant Orlando (Charles Cioffi), whose boss, Don Bernardo (J. Duke Russo), is behind bars, devises and begins to execute a wild plan to bring himself to a position of power in the mob; he engineers a situation that will put Frank's sexy fiancee Ruby (Angel Tompkins) into the arms of Don Angelo, thereby sending Frank into a murderous rage. Cult figure Sid Haig has a supporting role as The Arab. ~ Mark Deming, Rovi

Victor Argo
as Augie The Horse

Sid Haig
as The Arab

Critic Reviews for The Don Is Dead

For all the talent at work, it's ultimately forgettable, though plenty entertaining in the moment.

A Thrifty Drugs version of The Godfather.

A fun gangster potboiler made to cash in on the success of The Godfather. Full of shootings, double crosses, polyester and big '70s gas-guzzling cars.

Audience Reviews for The Don Is Dead

There are no featured audience reviews yet. Click the link below to see what others say about The Don Is Dead!

The Don Is Dead Quotes