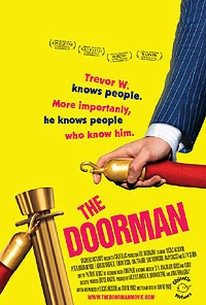 Filmmaker Wayne Price offers an humorous glimpse into the glamorous New York City nightclub scene with this profile of the man who determines just how the rest of your night will ultimately unfold. When a documentary crew sets out to explore the ultra-hip Gotham nightclub scene, they determine that the best guide to have is the man who separates the wannabes from the glamorous elite. Though at first Trevor seems like the perfect guide to the hottest spots in New York and Miami, the filmmakers gradually become savvy to the fact that this self-centered doorman has in fact lost his job and, as a result, his sense of identity. Subsequently prompted to embark on a soul-searching quest to find out who he really is, Trevor confides his deepest, most profound secrets to the film crew in a series of revelations that are sure to send red-rope rejects into fits of laughter.

Peter Bogdanovich
as Himself

Thom Filicia
as Himself

Denise Quinones
as Herself

Amy Sacco
as Herself

News & Interviews for The Doorman

Critics Consensus: The Dark Knight Is One Of The Year’s Best-Reviewed

View All The Doorman News

Critic Reviews for The Doorman

[Director] Price keeps the humor believably shallow and the movie from getting too far from the aim of chronicling an exclusivity junkie's fall.

Conjuring up memories of happier experiences gone by is the prime means of enduring such across-the-board ineptitude.

A mockumentary about the people who run Manhattan nightlife, has solid-gold satire at its cocaine-stained fingertips.

Built on an amusing idea that can't quite support an entire movie, Wayne Price's comedic debut might have made a terrific short.

Jesus, Bruno is so going to blow this guy out of the water.

Despite the fact that The Doorman features dozens of cameos by real-life boldface names, the film itself is a mess.

"Inane" would be the kindest description of The Doorman.

The influences for this poorly-made mock documentary are fairly obvious and if Lucas Akoskin was even 1/10th as funny as Sacha Baron Cohen, this movie might have worked.

Slip this mockumentary into the Not Worthy of Theatrical Release file.

With such an unconvincing center, all the air-kissing and second-hand glamour in the world can't make the film's mock-doc conceit hold.

"The Doorman" is a thinly written indie comedy--it's only 79 minutes long--that will have you kicking yourself for wasting whatever time and money you spent to watch it.

There are no featured reviews for The Doorman at this time.