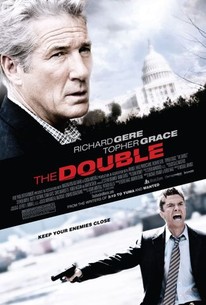 Critics Consensus: Riddled with hollow characters and ludicrous plotting, The Double just isn't worth the trouble.

Critics Consensus: Riddled with hollow characters and ludicrous plotting, The Double just isn't worth the trouble.

Critic Consensus: Riddled with hollow characters and ludicrous plotting, The Double just isn't worth the trouble.

In The Double, the mysterious murder of a US senator bearing the distinctive trademark of the legendary Soviet assassin "Cassius," forces Paul Shepherdson (Richard Gere), a retired CIA operative, to team with rookie FBI agent, Ben Geary (Topher Grace), to solve the crime. Having spent his career chasing Cassius, Shepherdson is convinced his nemesis is long dead, but is pushed to take on the case by his former supervisor, Tom Highland (Martin Sheen). Meanwhile, Agent Geary, who wrote his Master's thesis on Shepherdson's pursuit of the Soviet killer, is certain that Cassius has resurfaced. As Shepherdson and Geary work their way through crimes both past and present, they discover that Cassius may not be the person they always thought him to be, forcing both to re-examine everything and everyone around them. -- (C) Image

Ivan Fedorov
as The Scrounger

News & Interviews for The Double

Critics Consensus: Puss in Boots is the Cat’s Meow

View All The Double News

Critic Reviews for The Double

Like a magician performing one too many tricks, "The Double" overplays its deception while spinning a mildly diverting yarn.

With nothing resembling a character worth rooting for, the fact that the plot of The Double just gets sillier and sillier makes it one of the most annoying films of the year.

Like a stripper who gets naked too quickly, the lukewarm spy thriller "The Double" lays out its big plot twist early in the movie - and soon finds, shivering, that it has nowhere else to go.

When the story starts to fall apart you're left wondering if the film was worth all the money and effort that went into making it.

It's simply not very good.

Character motivations, sequences of events, and that thing called plausibility are all a bit offensively slapdash.

In short, for fans of spy films of the '80s and '90s, particularly those starring Gere, The Double will not disappoint.

Richard Gere and Topher Grace say the lines and hit their marks like professionals do, but almost from the opening scene it's clear that this is a thriller that is less than thrilling.

Have you ever seen a movie like this? Yes? Then you know the answers to those questions. Or at least some of the answers. And you're right, they all involve "gotcha."

It's not bad, but it's not great either.

Old laundry, a limp, doddering would-be thriller that desperately needs Jack Bauer to show up and start shooting things and yelling at people.

Audience Reviews for The Double

Well, a movie with Richard Gere that I didn't like too much. It was passable, due to the quality of the actors. The storyline, however, just didn't seem to sit well with me. Plus, for them to give away the murderer right in the beginning was a big mistake, in my opinion....

Martin Miller: This guy has used every kind of weapon you can think of. From an M-4 at 12 hundred meters, to a rusty nail.  "Keep Your Enemies Close" The Double is a film of good intentions, but in the end I was left wondering... Does writer/director Michael Brandt actually think this is smart or does he know how truly amateurish and by the numbers this whole film is? I'll admit that The Double is watchable. I had no problem sitting through the film, despite just how bad it is. It's got every standard scene and every standard plot device. It unfolds like a puzzle you've done a thousand times. You can piece it together with your eyes closed. When the twist comes at the end, it's just laughable. When a state senator is killed in the fashion of a famous Russian assassin who was thought to be dead; retired CIA agent Paul Shepherdson is brought in. He was on this assassins trail for years, but could never bring him in. Paul is adamant that the killing can't be Cassius because he believes Cassius to be dead. An up and coming, young FBI agent thinks differently. He wrote his thesis on Cassius and believes that this is his work. The two are teamed up to figure everything out.  There's not really too much to say about The Double. It's a movie that wants to appear like an original and well thought out thriller, but all it is is a rehash of other movies. There's little excitement to be had here because of the predictability and lack of real substance. There are a million plot holes, loose ends aren't tied up, and the whole affair seems kind of lazy. The nicest thing I can say about it, is that it was watchable. But even garbage can sometimes be watchable.

Michael Brandt puts together just enough of a crime thriller with The Double.

The story never draws itself out that much, although that isn't to say that this film is a quick breeze from start to finish. There are plot holes to be had, while other details are seemingly fulfilled with minimal explanations. Nevertheless, there are twists and turns to keep things moving along.

Only showing up when needed, the action and the violence are held in check. There is nothing overly showy about any of it and it is forgettable by the film's conclusion.

While not delivering any memorable performances, both Richard Gere and Topher Grace get by with their lead characters. To much dismay, Stana Katic is highly under-utilized. The lovely Odette Yustman appears as needed and is more noteworthy for her looks than anything else. The occasional side character tends to pop up at opportunistic moments as well.

The Double isn't perfect by any means; however, it is a watchable 90+ minutes of agents tracking down an assassin.