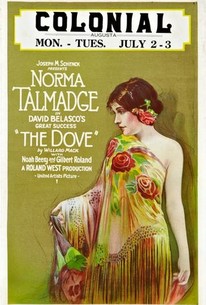 Adapted from the warhorse stage play by Willard Mack, The Dove proved a so-so vehicle for Norma Talmadge, but the lady's box-office appeal helped to overcome the film's weaker passages. Set in a mythical Mediterranean country, the story is motivated by despotic political boss Don José (Noah Beery Sr.) Madly in love with cabaret dancer Dolores (Talmadge), Don José is sorely annoyed when the girl evinces a preference for gambler Johnny Powell (Gilbert Roland). Pulling strings and calling in favors, Don José frames Johnny on a murder charge and sentences the poor fellow to the firing squad. But when Dolores implies that Don José is "less than a man" because he fears Johnny's competition, the villain relents and sets the gambler free -- losing his girl in the process, but regaining his bluster and bravado. The Dove was remade in 1932 as Girl of the Rio, then again in 1939 as The Girl and the Gambler; in both cases, Leo Carrillo took over from Noah Beery as the "good bad man."

Critic Reviews for The Dove

The Dove doesn't threaten to get under the skin and hasn't the dramatic intensity of the play. It's spasmodically slow.

[West] has done some very clever work on this production. It has real atmosphere and, although there is a desire to make Miss Talmadge... a trifle too much of a guitar-playing angel, once one accepts this sweet girl the story runs along nicely.

Withal, the story moves forward with painful slowness. It is really only hackneyed melodrama that the producer has decked out in all this scenic paraphernalia.

Plot, photography, direction and the performances of Noah Beery and Norma Talmadge, make the picture about three notches better than the run of hot country idylls.

It is a splendid picturization of a highly entertaining story.

Thrilling adventures hold the onlooker in suspense until the last moment, when Dolores saves her lover from the deadly bullets by an appeal to the overweening vanity of Don Jose.

The Dove soars slowly at times but it has a generally well sustained interest.

Although she has done better work in other productions, her interpretation of The Dove will rank as one of her long list of fine pictures. She injects splendid acting into the part of the girl entertainer tn a gambling den.

There are no featured reviews for The Dove at this time.