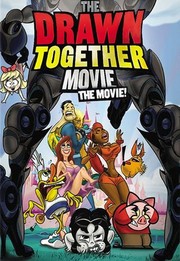 The Drawn Together Movie: The Movie!

The Drawn Together Movie: The Movie! Reviews

April 16, 2019
Don't bother paying for this movie. You're gonna want your money back after the first ten minutes of this film.

August 15, 2017
Drawn together may get a lot of hate. But personally, I feel that MOST (key word is most, not all) of the hate is undeserved. Let me explain why I think this movie is better than most give it credit for.

Firstly, the humor in this movie is very good: it contains my in-jokes and references for fans of the show, and contains enough sexual content to satisfy even the most depraved of perverts. However, if you're not a fan of sexual humour / dirty jokes, you might not think the humour in this film to be the best. Even still, the jokes in this movie are unique, off the wall, and well thought out: many of them had me in tears.

Secondly, the characters are all lovable and creatively designed. I feel that they near-perfectly represent the stereotypes of animation: from spanky, who represents internet animation, to Clara, a twisted version of a damsel in distress, and wooldorf, an adult version of Spongebob; I think this movie hits the nail on the head from a parody standpoint. In addition, these characters also play off each other nicely, leading to some interesting conflicts and situations.

Thirdly, the use of nudity in this film adds to the atmosphere. Drawn together was not a series meant for kids, and when this movie got the freedom to put in nudity: it really complemented the tone nicely. While the nudity is not overused, I think it's also a bit underused: if I was the writer for this movie, i would definitely make sure to add in more nudity and sexual content. Nonetheless, it's a great addition to the film, and, as said before, adds very nicely to the atmosphere.

So, now that we've discussed the good things, let's move on to the bad things.

The animation is subpar: as with most flash animated shows, the animation can look stilted and cheap at times. While it is not evident during most of the film, there are definitely some moments where the characters could use more emotion or fluidity. This, however, is a minor complaint, and it did not in any way stop me from enjoying this film.

Some of the characters can be predictable: while this doesn't make the movie unwatchable, it is a pet-peeve of mine to see one-dimensional characters. For example, all the jokes about captain hero revolve around him being useless, and he has barely any lines to give him depth or make up for that. In addition, I feel that out of all the main cast, spanky lacks the most when it comes to having a story arc: his character isn't very fleshed out, and he's thrown to the wayside and used only for one off gags.

The sex scene is kinda lame: I was looking forward to this the whole time I was watching through the movie, only to have a 1 minute clip. I feel it shouldn't have been advertised on the back of the box to the point that it was: which would have been acceptable if it was... let's say... around 5 minutes in length. In short, it was a letdown.

Some scenes lack tension or are just flat out filler: the first 15 minutes of this film lack any sort of buildup and don't give the audience any useful information. It's just the writers padding out the run time with jokes and redundant dialogue. In addition, there are many scenes which could've been trimmed down to allow more room for the main plot to unfold.

All in all, I'd say this movie is worth watching. Just don't have very high expectations for it, because even for fans of the show, it won't be the best thing in the world.

Corey S
July 25, 2017
Sure the animation has been reduced to Flash and (depending on how the viewer initially saw the show; I watched the uncensored DVDs) it breaks the illusion of watching the series but it stays true to the gross-out and depravity of its source material if not a little more than necessary.

Smashproplaya !
June 22, 2017
This is a big disappointment to someone who loves the series

December 11, 2016
horrifyingly terrible and it doesn't even deserve the half a star I gave it it deserves a negative 5 stars being one of the worst times of my life yet not even being the worst

Ryan W
September 8, 2016
Clearly the writers had no boundaries on this film, while at times I found myself wishing that there was more direction, it was still a very entertaining show. By the end of the show we realize they never wanted the movie to have a huge point to it, which suits the Drawn Together Movie perfectly. I still think the viewers deserved something a little more epic however.

Anthony G
August 11, 2016
This is a weird way to end the most adult cartoon in existence.

June 11, 2016
If you like Drawn Together ... Believe me this think is awful, all the movie are simple and stupid jokes worst than the tv show

Connery C
½ April 16, 2016
The writers probably fucked up because no one likes this. Not even the people that like the show like this movie. It's shit all around.

Joetaeb D
March 30, 2016
The Drawn Together Movie offers plenty of belly laughs for fans of the TV show but at times dips into insanely gratuitous shock value, which could be a turn off for non converts.

Ryan V
½ November 4, 2015
Drawn Together was a raunchy TV comedy where a group of broadly-defined cartoon archetypes were sequestered under constant surveillance and obliged to compete in challenges reflective of then-popular reality TV programs like The Surreal Life, Fear Factor, Big Brother, or Survivor. That sounds like a concept that instantly dates itself, so it's a bit of a surprise to find that this series limped along for three seasons and a direct-to-DVD movie. The film attempts to tie up the arc of Drawn Together with a metafictional story that relies heavily upon lazily-written "shock humor", incredibly cheap-looking animation, and a general vibe of sour grapes.However, for all its blustering about with crude jokes and "politically incorrect" fratboy humor, The Drawn Together Movie: The Movie! is almost relentlessly dull; that's probably the cardinal sin for any creative project that seems to pride itself upon being tasteless.

Taylor G
September 13, 2014
Not even the show was this disgusting!

Daniel L
November 9, 2013
as a fan if the show this was pretty damn funny.

Alberto G
June 10, 2013
The series was awesome. Vulgar, shocking, tasteless, corny & senseless, and yet, hilarious. The movie only pushed the boundaries they couldn't on cable TV, to push the envelope if I may say. Nothing wrong with that, except they forgot to make it hilarious too. Not bad, but below the standards of three excellent seasons.

Super Reviewer
Sylvester K
March 1, 2013
This is quite a disappointing movie version that didn't live up to the standard of the TV series. At least they got all the voice actors back, but still, the animation has changed quite severely. It did make me laugh quite a bit, but it seemed cheap.
Page 1 of 8