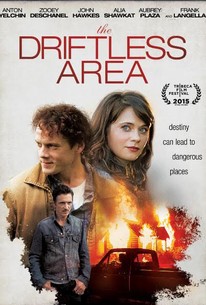 Pierre (Anton Yelchin) returns to his hometown after the death of his parents and falls under the spell of the enchanting, mysterious Stella (Zooey Deschanel). As their relationship deepens, Pierre finds himself in a dangerous situation with a volatile criminal (John Hawkes) who abruptly altered the course of Stella's life. Also starring Aubrey Plaza, Frank Langella, Alia Shawkat and Ciaran Hinds

Elika Portnoy
as The Tragic Woman

Jesse Haddock
as Partygoer
View All

Critic Reviews for The Driftless Area

A self-consciously quirky, slightly otherworldly tale whose eagerness to win audiences over with whimsy only succeeds at keeping us at arm's length.

It's watchable, but...more a movie that you like and appreciate than respect or feel challenged by.

Glaciers didn't go through this area, so there's no drift (silt, clay, sand, gravel, and boulders). So the area is therefore driftless. That's very interesting. To geologists.

"The Driftless Area" isn't so much bad as it is trivial and forgettable, but in a day and age of dwindling cinemagoers, and interest in adult storytelling fading from the big screen, its weary insignificance feels all the more criminal.

Audience Reviews for The Driftless Area

There are no featured audience reviews yet. Click the link below to see what others say about The Driftless Area!