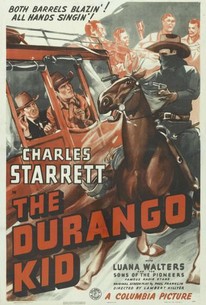 Columbia Pictures' resident cowboy ace, Charles Starrett, turns into a regular prairie Robin Hood in this fine Western directed by the veteran Lambert Hillyer that also features the singing group of Bob Nolan and the Sons of the Pioneers. The Pioneers are ranch hands working for Sam Lowry (Frank LaRue), who is expecting the return from Texas of his son, Jim (Starrett). That very same day, Sam is shot in the back and killed by Bixby (Steve Clark), who is in the employ of Mace Ballard (Kenneth MacDonald), a local cattle baron waging a war against the homesteaders. Ballard conveniently blames one of the nesters for the killing and to get to the truth, Jim dons the garb of the feared Durango Kid, a Texas outlaw with a social conscience. The marshal (Melvin Lang) appoints Jim deputy and assigns him to track down the Kid, a tricky situation that Jim handles in style. Desperate to cover his tracks, Ballard lures Jim/Durango into a trap, but the scheme backfires and the villain is made to confess. ~ Hans J. Wollstein, Rovi

Tim Spencer
as Tim
View All

Critic Reviews for The Durango Kid

There are no critic reviews yet for The Durango Kid. Keep checking Rotten Tomatoes for updates!

There are no featured reviews for The Durango Kid at this time.