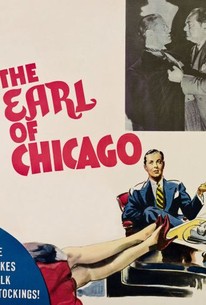 The schizophrenic screenplay of The Earl of Chicago is rendered even more bizarre by the uneven performance by Robert Montgomery. He plays Silky Kilmont, a Runyonesque American gangster who inherits a British title (Earl of Gorley) and mansion. Taking charge of his new estate, Silky has an amusing time trying to acclimate himself to the customs of the "landed gentry". Things take a sinister turn when Silky discovers that his trusted attorney Doc Ramsey (Edward Arnold) is actually a bigger crook than he is. In a rage, Silky murders Ramsey, then goes into what appears to be a catatonic shock, refusing to defend himself at his murder trial. Blood finally tells at the climax when Silky Kilmont, aka the Earl of Gorley, meets his fate with a dignity and decorum worthy of his aristocratic forebears. The queasy atmosphere of the film is heightened by its utter lack of romance; outside of character actress Norma Varden, there are barely any women in the film at all.

Edmund Gwenn
as Munsey, the Butler

Robert Warwick
as Clerk at Parliament

Critic Reviews for The Earl of Chicago

Audiences that are looking for something novel may find this melodrama extremely interesting.

With the exception of Rebecca, this picture is probably the finest currently making the rounds.

Audience Reviews for The Earl of Chicago

There are no featured audience reviews yet. Click the link below to see what others say about The Earl of Chicago!

The Earl of Chicago Quotes