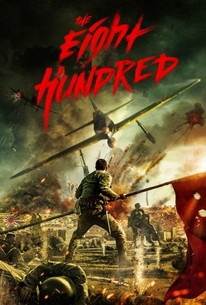 The film is based on true stories taking place during Sino-Japanese war in Shanghai, China, in 1937, the battle and protection of the Si Hang Warehouse. There are around 400 soldiers (so called Eight Hundred Heroes in history), holding out against numerous waves of Japanese forces for 4 days and 4 nights.

Jing Liang
as Wife of Professor

Jing Liang
as Wife of Professor

Chen Yao
as He Xiangning

Wei Zheng
as A Qiu

Critic Reviews for The Eight Hundred

The Eight Hundred bites off more that it can chew but it consistently serves up gripping filmmaking on the biggest canvas.

"The Eight Hundred" fetishizes martyrdom, but for those seeking big-screen, epic violence, it's pretty much the only game in town.

Guan goes hammer and tongs with the special effects, delivering stupendously, joint-rattlingly-loud battle scenes and combat sequences edited to the lightning pace of a superhero movie.

The Eight Hundred is thin on characterization, and too often slips into rote narrative and war movie cliches.

[A]t least those who like blunt metaphors with their war movies will get a kick out of Hu's most blatant device: a majestic white horse that the NRA lets gallop through the warehouse as if rubber-stamped with the words "hope."

Plunges audiences into both the intimacy and magnitude of brutal war spectacle while immersing them in a stunningly mounted period canvas.

Flag-waving propaganda it may be, but The Eight Hundred makes for stirring, satisfying entertainment.

Every penny of the considerable budget is up there on the screen, with the blood and grime of the battlefield conveyed through intense action.

As bombastic and melodramatic as one might expect it to be, ﻿The Eight Hundred is also relentlessly thrilling, and exquisitely photographed on huge, practical sets.

The scale and period detail are often jaw dropping. The carnage is massive and the unflinching brutality of the fighting includes some hard-to-watch scenes where soldiers are forced at gunpoint by a sadistic commander to execute prisoners.

The benefit is a quite overwhelming, palpable realism.

There are no featured reviews for The Eight Hundred at this time.