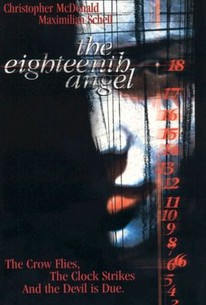 This ominous apocalypse thriller sports a fairly ambitious but ultimately confusing plot involving a prophecy which proclaims that the return of Satan will be precipitated by the arrival of eighteen physically-perfect angelic beings. In order to fulfill the prophecy, a secret sect of Etruscan monks conspire with an obsessed geneticist to artificially manufacture the requisite number of perfect specimens, with the only setback being the lack of a suitably beautiful face for each of the eighteen clones. To complete the equation, the monks devise a plan by which they can obtain faces from unsuspecting "donors." The last of the potential candidates is lovely model Rachael Leigh Cook who, after a bizarre series of events beginning with her mother's death, finds herself in the monks' evil clutches. Decent production design gives some class to this direct-to-video production, together with good performances and a pervasive sense of doom. The film ultimately falls short of cult-classic status due to an excessive amount of irrelevant and frequently unresolved subplots -- particularly one involving the family cat.

Francesca Fanti
as Doctor
View All

Critic Reviews for The Eighteenth Angel

There are no critic reviews yet for The Eighteenth Angel. Keep checking Rotten Tomatoes for updates!

Audience Reviews for The Eighteenth Angel

One of the, now common, "doom foretold" horror films in the school of classic, The Omen. This one can't quite make it's mind up whether it's here to scare us or shoecase Rachel Leigh Cook's good looks and modelling talent as she slightly spookily plays a central character who is meant to be a few years younger than her. Though not without its flaws, the film has a stong cast, a fair amount of satanic atmosphere occurring and, whilst not offering anything remotely original, should be enjoyable to fans of the genre.