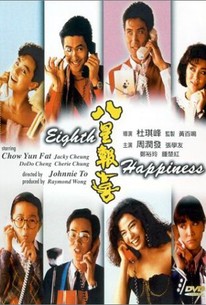 Hong Kong filmmaker Johnny To directed this all-star holiday comedy, another in a string of popular Lunar New Year entertainments for actor/producer Raymond Wong, who engineered the similar All's Well, Ends Well series. As usual, the plot line is just an excuse for a series of amusing cameos and comic routines, but provides a number of laughs as it tells the story of three brothers, the mincingly effeminate Fang Chien-lang (Chow Yun-fat), cartoonist Chien-sang (Jacky Cheung), and their middle-aged older sibling, Chien-hui (Wong). Chien-lang romances both a stewardess (Carol Cheng) and a hedonistic department store saleswoman (Cherie Chung) who has a boyfriend (Lawrence Cheng); Chien-sang falls for a jogger named Ying-ying (Fennie Yuen); and Chien-hui romances a Chinese opera singer (Petrina Fung) whom he isn't aware is the same person who has been crank-calling him. As a result of some telephone problems, all three brothers experience some wild ups and downs in their respective relationships before finally attaining romantic bliss following a climactic opera performance involving all the main characters. As with Wong's other holiday films, genre aficionados will have a field day spotting familiar faces, including Karl Maka and Teddy Robin Kwan in the audience, and City on Fire director Ringo Lam as Fung's husband.

Critic Reviews for The Eighth Happiness

There are no critic reviews yet for The Eighth Happiness. Keep checking Rotten Tomatoes for updates!

Audience Reviews for The Eighth Happiness

There are no featured audience reviews yet. Click the link below to see what others say about The Eighth Happiness!