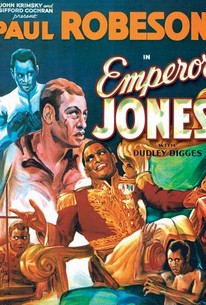 Adapted by DuBose Heyward from a Eugene O'Neill play, Emperor Jones is one of Paul Robeson's earliest and most powerful leading roles. Railroad porter Brutus Jones (Robeson) leaves his girlfriend Dolly (Ruby Elzy) in favor of Undine (Fredi Washington), but he soon leaves her too. Brutus is a master manipulator, liar, and swindler who murders his friend Jeff (Frank Wilson) over a crap game. He ends up on a chain gang, but escapes to Haiti where the white trader Smithers (Dudley Digges) buys his freedom. He then scams his way into a business partnership with Smithers and becomes rich. He plays tricks on the natives with a gun, proclaiming that only a silver bullet can kill him. The natives believe he is immortal and he declares himself emperor, holding a tyrannical rule over the people. They naturally revolt, and he is forced to escape into the jungle. Brutus disappears into the woods where he hears voices and sees visions, eventually leading up to his suicide.

Taylor Gordon
as Stick-Man
View All

Critic Reviews for The Emperor Jones

It is a distinguished offering, resolute and firm, with a most compelling portrayal by Paul Robeson.

Paul Robeson gives one of his greatest film performances in this arty, dated, but interesting 1933 adaptation of Eugene O'Neill's play.

Both the photography sound are excellent and the direction by Dudley Murphy is well done.

It pretends to be art, [but it] is commercialism of the worst sort.

The result, to my amazement, was an unexciting and indifferent motion picture.

A great performance from the legendary African-American singer Paul Robeson.

Despite its marked deficiencies ... remains a "must see" for historic and cultural purposes

Audience Reviews for The Emperor Jones

I didn't watch the whole movie, I got bored. If you want to see a good old African American film, you may find this one interesting, but other than that, it's kind of boring.