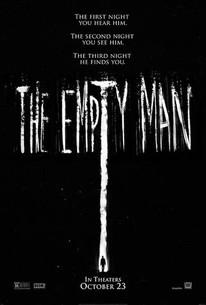 In a quiet town in the rural Midwest, a former police officer (Stephen Root) takes it upon himself to continue investigating the disappearance of a young girl despite the case going cold. In his search, he stumbles upon a group of youths that he suspects may be harboring a sinister, supernatural secret. The further he becomes involved with the group, the more connections to his investigation he pieces together. Based on the graphic novel of the same name by Cullen Bunn and Vanesa R. DelRey. Written and directed by David Prior. Joel Courtney and Robert Coutts co-star.

News & Interviews for The Empty Man

View All The Empty Man News

Critic Reviews for The Empty Man

Producers couldn't have picked a better title, though. After I left my Friday afternoon screening, attended by a whopping two other people, I felt far from satisfied. Empty, you might say.

"Empty" is an apt way to describe this overlong and sluggish supernatural horror pic.

This long, slow-burn sci-fi tale takes its simple "urban legend" idea into ambitious territory, but, by the time it wraps up, it all makes too little sense to justify sitting through it.

While it does offer a new angle on a familiar horror setup, spinning into an entirely different subgenre in the process, The Empty Man stretches out an underbaked idea to an excruciating degree.

A movie that makes Fox's polarising and similarly-confounding A Cure For Wellness now look like a masterpiece and "almost" make you yearn for the simpler "delights" of the much-derided Slender Man.

Although Disney has changed the name of the studio in February, they didn't even spare the expense to swap out the 20th Century Fox logo and presenting credit on the DCP sent to theaters.

Empty is an understatement.

Nate Adams
The Only Critic

Not at all the movie that its trailers are selling--and in this case, that's a good thing.

There are no featured reviews for The Empty Man at this time.