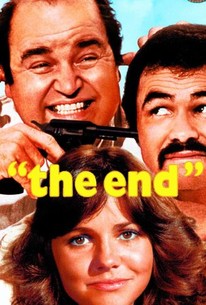 Filled with jet-black gallows humor, this farcical comedy chronicles the quest of a terminally ill man to commit suicide. His first couple of attempts land him in a special rest home where he meets a loyal schizophrenic who vows to help his new friend end his life.

Robby Benson
as The Priest

Critic Reviews for The End

A tasteless and overripe comedy that disintegrates very early into hysterical, undisciplined hamming.

An engaging attempt to take the piss out of the crocodile tears that have been gleefully exploited since Love Story.

This is half-heartedly satiric material that's been directed by Mr. Reynolds as if it were broad, knock-about comedy sometimes and, at other times, as if it were meant to evoke pathos, which it never does.

So what's wrong? Practically everything. For all of its good intentions, The End is a tone poem in misgauged effects. It simply doesn't work.

An acceptable commercial product that's entertaining despite its notable lack of structure. [Full Review in Spanish]

The madcap fun doesn't kick in until Dom DeLuise shows up as the energized wacko Polish inmate in the same loony bin as Burt Reynolds.

The film veers wildly from decent black comedy to dumb slapstick, and director Reynolds seems unsure of his own intentions.

An intermittently successful dark comedy with a few solid gags.

Not nearly as bad as its reputation. It's even pretty interesting.

Audience Reviews for The End

A hilarious dark comedy with an all star cast, and directed by Reynolds. I love it, and I highly recommend it.

This movie is terrible. It also shows that Burt Reynolds is an egotistical maniac. Bar none, it has the most unfunny racial humor I have ever heard. (Imagine Clint Eastwood in Gran Torino, but not funny and every "joke" making you feel sleazy for being a white person). Then Dom DeLuise (did he have something going on the side with Burt?) kept saying these retarded Polish jokes that I heard when I was a kid and they weren't funny then. Everyone in this movie is terrible (Sally Field LOOKS amazing in this film). I imagine Burt sitting back and watching the dailies and thinking what a funny guy he was while everyone of his ass-kissing crew sat around and chuckled along with him. It is rare when you can find a movie that shows the true soul of a filmmaker, and in the case of Burt Reynolds, he's a douschebag.

Rating this from memories of long ago. Need to see it again. Rating may or may not change.

Not very funny. Burt Reynolds is a bit annoying and unsympathetic. Dom DeLuise is annoying as well. I wasn't too thrilled with this film.