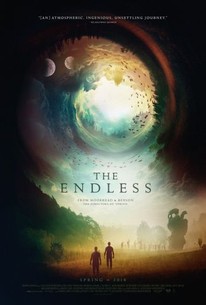 Critics Consensus: The Endless benefits from its grounded approach to an increasingly bizarre story, elevated by believable performances by filmmakers Justin Benson and Aaron Moorhead.

Critics Consensus: The Endless benefits from its grounded approach to an increasingly bizarre story, elevated by believable performances by filmmakers Justin Benson and Aaron Moorhead.

Critic Consensus: The Endless benefits from its grounded approach to an increasingly bizarre story, elevated by believable performances by filmmakers Justin Benson and Aaron Moorhead.

Following their Lovecraftian modern cult classic SPRING, acclaimed filmmakers Moorhead and Benson return with this mind-bending thriller that follows two brothers who receive a cryptic video message inspiring them to revisit the UFO death cult they escaped a decade earlier. Hoping to find the closure that they couldn't as young men, they're forced to reconsider the cult's beliefs when confronted with unexplainable phenomena surrounding the camp. As the members prepare for the coming of a mysterious event, the brothers race to unravel the seemingly impossible truth before their lives become permanently entangled with the cult.

Glen Roberts
as Woods
View All

Critic Reviews for The Endless

Unfortunately the filmmakers introduce a sci-fi element in the second half that deflates much of the interpersonal tension and shifts the focus from the subtleties of mind control to the vagaries of time and space.

The biggest lesson of The Endless is how we can allow our lives to loop around in one crappy cycle until we cop out.

Despite an imaginative concept, the narrative feels surprisingly bland, even when the pieces begin to fall into place - and when there's no quick punchline to fall back on, the film suffers.

The cinematography is fluid. The performances are cool and precise. The film itself is worth forming a cult around.

A mind-bending Möbius strip of a movie, this indie sci-fi makes up for what it lacks in budget with a wealth of playful ideas.

It's slightly baffling at times, but always inventive and disquieting.

I felt like it was very confusing about the whole history behind the boys... but I do feel like there is some great production value in there.

...the thin premise is, at 111 minutes, consistently stretched to its breaking point.

Two brothers pay a visit to the "UFO death cult" they left ten years earlier, and have their eyes opened in ways they could not have expected. Starring and directed by Aaron Moorhead and Justin Benson, The Endless screams cult potential.

The Endless doesn't scream at the top of its lungs. Instead, it leaves you asking, "Did I just see what I thought I saw?"

A puzzle to unravel, a maze to solve, it presents a smart, satisfying mind-bender of a sci-fi/horror hybrid.

The Endless is disturbing at times, comforting, darkly funny and even confounding, and that's all part of the ride to which you commit.

Audience Reviews for The Endless

Much like its sister-film Resolution, this is a mostly uneventful low-budget science fiction that takes forever for things to start to happen - and when they finally do, the result doesn't live up to its promising ideas, becoming only confusing and disappointing in its execution.

Inspired filmmaking and with a bizarre concept we are left with an indie film that puts Hollywood to shame. This is like a Shane Carruth created film, it has elements of intelligence and carefully crafted storytelling. Justin Benson, Aaron Moorhead will have a bright future in the film industry, they may not have the fame or glory, but they will have body of work that reflects the talent behind them. The Endless was a hard film to explore, it wants to be more than the budget allows, which is a shame, but on the other hand it inspires creativity. You will never see a Hollywood film like this, they won't make a big budget film where you need to think. The Endless is one of my favourite new films, even though it came out in 2017. I enjoyed the hell out of it and will recommend it to everyone. Beware it is an indie film, but don't let that discourage you. 09/12/2018.

They say 'fear of the unknown, is the greatest fear there is'. Well, The Endless is that type of film that uses the unknown to their benefit to increase the fear and underlining mystery of the film. Centered on two brother trying to reconnect with their cultist upbringing with a very H.P. Lovecraft inspired context. It's an excellent film that uses it's thought provoking plotting to it's surreal nature of the story and the philosophical nature of the cult members to provide a great sense of drama, conflict and mystery. More of less they say 'minimalism is more' and here it's just about right, filled with terrific writing, acting directing and cinematography, 'The Endless' is a film that should be seen by a large number of audiences to appreciate as one of this year's best. Luckily enough I was able to see it at the Melbourne International Film Festival when I did.