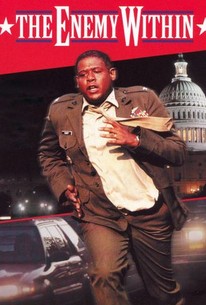 The Enemy Within Photos

An attempt to overthrow the President of the United States is the subject of this made-for-cable conspiracy-thriller. Forest Whitaker stars as Colonel Mackenzie Casey, a loyal member of President Foster's (Sam Waterston) inner circle. When Casey discovers a plot by his superior (Jason Robards) to stage a coup during military exercises, he teams up with Foster to thwart the plans before it's too late. The story was based on a novel by Charles W. Bailey and Fletcher Knebel, and Whitaker was nominated for a SAG Award for his lead performance.

Jayne Hess
as Reporter No. 2

Steven Ruge
as Reporter No. 1

Critic Reviews for The Enemy Within

There are no critic reviews yet for The Enemy Within. Keep checking Rotten Tomatoes for updates!

Audience Reviews for The Enemy Within

There are no featured audience reviews yet. Click the link below to see what others say about The Enemy Within!

The Enemy Within Quotes