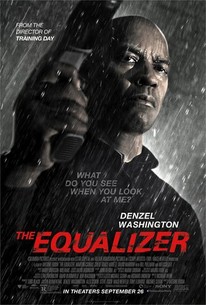 Critics Consensus: The Equalizer is more stylishly violent than meaningful, but with Antoine Fuqua behind the cameras and Denzel Washington dispensing justice, it delivers.

Critics Consensus: The Equalizer is more stylishly violent than meaningful, but with Antoine Fuqua behind the cameras and Denzel Washington dispensing justice, it delivers.

Critic Consensus: The Equalizer is more stylishly violent than meaningful, but with Antoine Fuqua behind the cameras and Denzel Washington dispensing justice, it delivers.

In The Equalizer, Denzel Washington plays McCall, a man who believes he has put his mysterious past behind him and dedicated himself to beginning a new, quiet life. But when McCall meets Teri (Chloë Grace Moretz), a young girl under the control of ultra-violent Russian gangsters, he can't stand idly by - he has to help her. Armed with hidden skills that allow him to serve vengeance against anyone who would brutalize the helpless, McCall comes out of his self-imposed retirement and finds his desire for justice reawakened. If someone has a problem, if the odds are stacked against them, if they have nowhere else to turn, McCall will help. He is The Equalizer. (c) Sony

News & Interviews for The Equalizer

View All The Equalizer News

Critic Reviews for The Equalizer

This paint-by-numbers film, though powerful when you watch it, largely thanks to its lead actor, has no lasting emotional affect.

The movie's all about reading, especially with a critical eye, but when you take too close a look at its disparate parts, they neither add up nor have anything constructive to teach.

Noting the giant plot holes and laughing at the picture's overinflated self-importance become the closest thing it offers to entertainment. God, what a rotten movie this is.

The director, Antoine Fuqua, relies on small details, which anchor the vigilante-as-saint myth in at least a minimal degree of reality.

It's utter balderdash that could lose at least 30 minutes from its bloated running time, but I'd be lying if I didn't admit that the DIY violence struck a neanderthal nerve.

The laughs might be tongue in cheek but you get the feeling that's not what the filmmakers were trying to achieve.

It's a good movie and Denzel is, as always, charismatic and interesting, but if "the old man gotta be the old man," then The Equalizer gotta be more of an action movie to be completely satisfying.

Washington is interesting enough to sustain the 130-minute runtime, even though the finale is far too lengthy and enormously over-the-top.

A lazy and overly padded bore.

The Equalizer is dark and brutally violent...Fuqua adds his stylistic flair to the proceedings, but it has a more restrained feel than some of his other action outings.

While there's nothing particularly interesting on a surface level, a subtext of strangeness runs below the action, and there's such an insane, action genre one-upsmanship going on that it's difficult not to be engage and even harder to look away.

Audience Reviews for The Equalizer

Squadrons of foreign baddies are coldly dispensed with using extreme prejudice, left and right, up and down, our hero a cynical garbage collector and no more. As cookie cutter as they come, this genre apparently a cash cow for all of Hollywood.

A vigilante action thriller that gets going very slowly and easily could have clocked in under two hours, but can rely on a charismatic leading man. Especially during the showdown the violence is surprisingly brutal, but there is little excitement building up, because our hero is so godamn cool and competent in each of its slow-motions, that you never doubt he could succeed. That's rather entertaining but could have been much cooler with more interesting minor characters and a little more threat.

Antoine Fuqua's The Equalizer takes a trip through Home Mart. A lengthy and cautiously paced introduction set things into motion. A lot is shrouded in mystery in the early going, but it all does its job when the story gets going. The atmosphere and mood of this action thriller proves to be the key to this picture. Then there's the action. The action is stylized; however, it does contain a sense of realism to it all. The mature violence also fits well with the story concept. DIY. To the film's advantage, Denzel Washington ends up with a likable character with an equal adversary, Marton Csokas, roaming the aisles. Chloe Grace Moretz has her moments early on. Despite a 2+ hour tedious pace, The Equalizer manages to become a rewarding thriller.

A movie based on an old late 80's American TV series but only very thinly. It is in fact more of an origins plot showing how the main character becomes a vigilante for hire...or The Equalizer. The actual story we see here and the main character are nothing to do with the original TV show (unless this plot is similar to a certain episode I don't know). The premise is a very simple one. Retired black ops government agent McCall (Washington) is friends with a hooker called Alina (Moretz), Alina is working for the Russian mob. One night McCall witnesses some of the gang members abuse Alina and a few days later she turns up in hospital badly beaten. This upsets McCall so he visits the head of the local Russian mob and offers to buy her freedom, the bad guys basically laugh at McCall...so he kills them all. Thusly a war is started between McCall and the Russian mob. This movie bears a striking similarity to another glossy revenge thriller...'John Wick', very similar in fact. There Wick goes on the warpath over his dead puppy, here McCall goes on the warpath over a rather sleazy looking lady of the night. The puppy I can understand because everyone likes puppies/dogs, your pet is your best friend, part of the family. The sleazy prostitute on the other hand I'm not so sure. How do you even know if this girl isn't a druggie, if you'll ever see her again, if she'll even be grateful...who can tell, risky gamble if you ask me. So I guess McCall sees something special in this rather young prostitute and decides to put his whole life on the line despite the fact he doesn't even know her that well (from what we see). From this point on its your predictable, cliched, stereotypical one man army job with Washington killing everyone...EVERYONE! This movie is all about giving the bad guys payback so expect lots of slow motion highly impressive fight choreography that looks slick as fuck but you know damn well would probably get you nowhere in a real scuffle. Washington has obviously been trained in various techniques that we've all seen before (errr...John Wick?) and executes them flawlessly against various stereotypical Russian baddies. Its not all about fisticuffs though, there is plenty of gun play naturally, some high-tech gadgetry and spy stuff and even some good old fashioned A-Team-esque DIY take downs utilising various objects. Actually the entire finale is set in a large Homebase (UK only) styled warehouse so obviously you know things like drills, nail guns, wire etc...will be used to snuff the villains out. I've always wondered how cool it would be to play war games in a place like that, now I know. Everything looks super stylised and well shot, lots of interesting camera angles, great lighting with lots of shadow usage, moody facial closeups, excellent gun porn, expensive cars, expensive sets etc...all the usual stuff. As for the bad guys well its business as usual of course, these guys are tattooed Russians. Cue lots of ultra short haircuts and facial hair, big bald guys, bling, made to measure outfits and holding your gun in the coolest way possible whilst looking twitchy. Its the usual stream of henchmen cannon fodder basically, the only highlight being the main bad guy flown in to hunt down McCall...Teddy. Yep lets give him a silly soft sounding name, that's really clever of us because in fact he's a nutcase and very tough. This character (in my opinion) is simply a poor man's Agent Smith (Weaving) from 'The Matrix'. He dresses in a suit of course, he looks the same, same type of hairstyle, same type of grimaces and even kinda talks the same to a degree, Russian accent aside. Again this movie is engaging but its not particularly good. We know McCall is a badass but he does things that seem impossible. When he kills the Russians at the start he manages to enter and leave their busy club without anyone noticing or hearing the commotion. When he sets up two crooked cops where the hell did he manage to get the CCTV of them threatening the restaurant owner originally? He pops up at locations outta nowhere and vanishes just as easily. He takes down an entire money laundering operation way too easily single handed. He manages to blow up an entire cargo ship at the docks single handed. Lastly when he had another crooked cop trapped in his car whilst flooding it with carbon monoxide why didn't the cop just break the glass or stop the window closing...its just an electric window! Yes this is a lean mean kickass machine, its very sleek, well made and well directed, but its just too damn unoriginal. How many times have we seen this?? aside from the fact that 'John Wick' did the exact same thing around a month after this came out!! (and a bit better). The main issues...its too long and the movie is trying way too hard to be serious and gritty when basically its nonsense. McCall manages to eradicate the entire Russian crime syndicate in Boston...and then he goes to Russia and wipes them all out there too! the fuck!! If he's that good he could erase more crime syndicates single-handedly all over. You gotta ask yourself why he hasn't been used to do this before, or why he hasn't decided to do so himself if he can so easily. Seriously, he's just one retired black ops dude, imagine what a whole team could do.