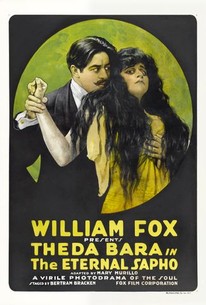 Like virtually all of Theda Bara's starring vehicles, The Eternal Sappho is a lost film. Contemporary historians, however, have been able to piece together its plot from publicity releases and the studio's cutting continuity. In this one, Bara plays a contemporary woman who imagines that she's under the spell of libertine Greek poet Sappho. Her quest for eroticism rather than true love proves disastrous. The film's script was taken (as far as possible, it seems) from the best-selling novel by Alphonse Daudet. ~ Hal Erickson, Rovi

Critic Reviews for The Eternal Sapho

[Bara] has vampired so much that she has lost her sense of values and caricatures a type of woman she formerly gave a vivid portrait of... The fault is really the director's for making her repeat so often a thing that was exaggerated in the beginning.

Bertram Bracken directed the picturlzatlon and he is entitled to a great measure of credit for the work he has done.

The pictureplay has been exceedingly well directed, and the dramatic portions of the offering are acted in competent fashion.

In The Eternal Sapho, [Bara] shows flashes of character definition and intense dramatic expression which she has not previously manifested. The piece itself is ponderously negligible.

While the story is marred by so many of these sensational events and coincidences, the picture holds attention in spite of them, largely because, as stated before, the direction and the acting are good.

There are no featured reviews for The Eternal Sapho at this time.