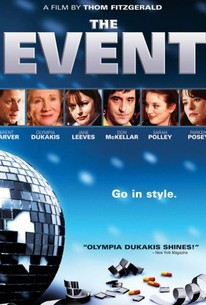 Canadian filmmaker Thom Fitzgerald directs the sentimental ensemble drama The Event. Nick (Parker Posey) is a district attorney investigating several deaths in the gay community of New York City's Chelsea District. It seems that many AIDS sufferers have died under similar mysterious circumstances. Each case suggest the use of assisted suicide, which is illegal in New York. HIV-infected cellist Matt (Don McKellar) has died of a drug overdose following a large party in Manhattan given by his family and friends. Nick first questions his lover Brian (Brent Carver), who runs an HIV support clinic. Still looking for answers, she interviews Matt's closest family members, including his mother Lila (Olympia Dukakis), his younger sister Dana (Sarah Polley), and his older sister Gaby (Joanna P. Adler). Meanwhile, Nick battles with her own past secrets involving her family back in New Jersey. The Event premiered at the 2003 Sundance Film Festival.

Critic Reviews for The Event

Uneven yet brave and touching.

To make a movie in 2003, one that centers around AIDS but ignores the epidemic's current culprit, Africa, and toys melodramatically with scenarios steeped in the filmmakers' selfish nostalgia without any real point, is to ask us not to think at all.

The performances of Olympia Dukakis as Matt's mother and Sarah Polley as his sister elevate The Event from melodramatic claptrap to sensitive drama.

A feminine hygiene commercial is by far the best thing here. Is that last item a curious thing to say about a film with such a weighty agenda? Exactly.

Despite its impeccable acting and subtle backdrop of the Sept. 11, 2001, attacks, The Event lets its message overwhelm its emotion.

Fails equally as lament and celebration.

The superb performances by Olympia Dukakis and Don McKellar are what make this film rise above its limited but well-meaning script.

[Deals] with extremely serious themes in a frank, honest and often humorous way.

Parker Posey and Olympia Dukakis lend their talents to an AIDS suicide film - it has its moments, but the death rattle comes from the genre, not from the central character.

Most of the characters have no real life beyond representing various viewpoints.

The tedious film just plays out far too long with little new to say.

The conversation about euthanasia is a good one to have, no argument here, so go have it instead.

Audience Reviews for The Event

A New York DA is investigating a suspicious suicide in the city's gay community. The movie turns into a debate on the pros and cons of assisted suicide. There are a few name actors in this movie (Olympia Dukakis, Sarah Polley, Parker Posey, etc.).