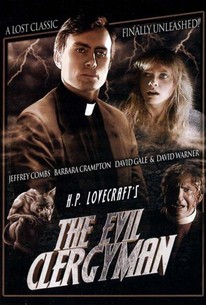 Created for the H.P. Lovecraft Film Festival, as a direct adaptation of 'The Evil Clergyman'. Our narrator is shown to an attic, which holds a dark history and the locals fear it greatly. Drawn to a strange object, and against all warning, he inadvertently summons a sinister clergyman from the past, witnessing the events that befell him. When he attempts to intervene, the clergyman approaches him. He grabs the flashlight device he used on the object, thinking it can protect him. When the light hits the clergyman, he falls down the stairs, but is not found at the bottom. Our narrator's companion returns, and reveals that though the ritual was not completed, our narrator has taken on the appearance of the Evil Clergyman forever.

Critic Reviews for The Evil Clergyman

There are no critic reviews yet for The Evil Clergyman. Keep checking Rotten Tomatoes for updates!

There are no featured reviews for The Evil Clergyman at this time.