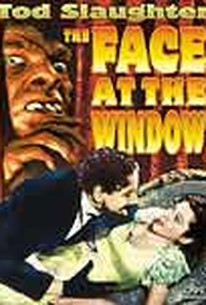 The Face at the Window Photos

As with any film featuring the outrageously operatic antics of early horror star Tod Slaughter, this slow, stagebound murder-mystery would be completely unwatchable without the producer-star's presence. A third adaptation of the stage play by F. Brooke Warren, this film stars Slaughter as Chevalier Lucio del Gardo, a respected Parisian aristocrat responsible for the ghastly crimes previously attributed to a notorious killer known only as "The Wolf." Del Gardo has concocted a devious plan with his deranged, brutish brother to pull off a rash of bank robberies, using The Wolf's murderous ways to throw police off their trail. Their plans are foiled in the end, though del Gardo apparently escapes the clutches of the law. One of Slaughter's better efforts, made bearable by a brief running time. ~ Cavett Binion, Rovi

Harry Terry
as The Face

Critic Reviews for The Face at the Window

A romance lies at the heart of this 65-minute potboiler, set in Belle Époque Paris and directed by George King with fine distinction drawn between the high and low life depicted.

The direction is good and gives as much lucidity to the plot as is compatible with the retaining of mystery and the curdling of blood.

Audience Reviews for The Face at the Window

There are no featured audience reviews yet. Click the link below to see what others say about The Face at the Window!

The Face at the Window Quotes