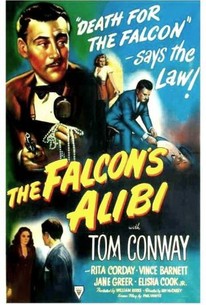 A loose remake of 1941's The Gay Falcon, The Falcon's Alibi is one of the better entries in RKO's "Falcon" series, and one of the few that can stand on its own merits as a "film noir." This time, amateur detective Tom Lawrence (Tom Conway), aka the Falcon, is hired by a wealthy woman's secretary to protect the lady's precious jewels. Nevertheless, the thief still manages to get away with them, which puts Lawrence hot on his trail. ~ Hal Erickson, Rovi

Myrna Dell
as Girl With Falcon

Alf Haugan
as Doorman
View All

Critic Reviews for The Falcon's Alibi

Enjoyment in the routine 12th entry in the Falcon series is enhanced by the appearance of Elisha Cook Jr.

There are no featured reviews for The Falcon's Alibi at this time.