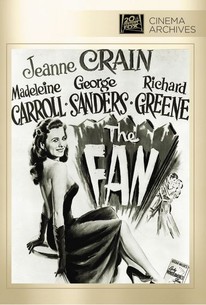 In this revised adaptation of Oscar Wilde's famous comedy of manners, Lady Windermere's Fan, the middle-aged but still beautiful Mrs. Erlynne (Madeleine Carroll), well-known for her romantic adventures, has cast her eye upon Lord Windermere (Richard Greene), who is married to Lady Windermere (Jeanne Crain), a woman young and beautiful but socially conservative and harsh in her judgements of others. Lord Windermere is just as interested in Mrs. Erlynne as she is in him, and soon he's giving her money to live in the lavish manner to which she's accustomed. When Lady Windermere discovers this, she takes up with handsome rogue Lord Darlington (George Sanders), who makes no secret of his interest in her. When Mrs. Erlynne hears of Lady Windermere's indiscretion, she urges the younger woman not to make the tragic mistakes she has made and reveals a long-hidden secret: she is actually Lady Windermere's mother. The legendary Dorothy Parker co-wrote the screenplay for The Fan, which proved to be the last film for co-star Madeleine Carroll.

Martita Hunt
as Duchess of Berwick

Critic Reviews for The Fan

There are no critic reviews yet for The Fan. Keep checking Rotten Tomatoes for updates!

Audience Reviews for The Fan