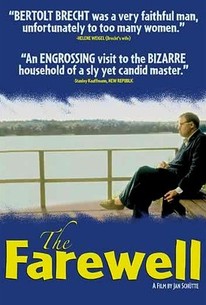 Infused with a mood of apprehension and decay, this film concerns theatrical luminary Bertolt Brecht (played by Josef Bierbichler) and his inner circle on the final day of their summer vacation in 1956. Set entirely in Brecht's summer house in the East German countryside, the guests consist largely of the writer's lovers, past and present. Brecht's wife Hellene Weigel (Monika Bleibtreu) -- Helli for short -- has taken a remarkably charitable view of her husband's philandering. Brecht's current mistress, young actress Kathe Reichel (Jeanette Hain) is one of their guests, along with political dissident Wolfgang Harich (Samuel Fintzi) and his wife, who is having an affair with Brecht with her husband's approval. Also, there is ex-lover and dissolute drunk Ruth Berlau (Margit Rogall); Brecht's editorial assistant, Elisabeth Hauptmann (Elfriede Irrall); and the playwright's teenaged daughter, Barbara. Each guest angles to garner Brecht's attention. Preparing to leave for a rehearsal in Berlin, Helli is visited by a young Stasi officer who informs her that Wolfgang will be arrested and charged with treason. Fearing for her husband's bad heart, she entreats the apparatchik to do the deed after Brecht has left. As arrangements are made behind Brecht's back, a feeling of doom soon pervades the cottage. This film was screened at the 2000 Cannes Film Festival. ~ Jonathan Crow, Rovi

Tilman Gunther
as Man with Hat

Critic Reviews for The Farewell

A gentle film about a lion of a man who, as a communist, was forced to leave Germany, lived almost penniless in Europe and America during the war and returned to his homeland in 1948.

The author's devotees will probably find it fascinating; others may find it baffling.

Intelligent, caustic take on a great writer and dubious human being.

The movie is full of fine performances, led by Josef Bierbichler as Brecht and Monica Bleibtreu as Helene Weigel, his wife.

A well-acted and quiet character study of Brecht that clearly shows why the author was so tired during his last days, but tells little of his art or politics.

If the atmosphere of The Farewell conjures up a Greek tragedy, the mere sight of Brecht's typewriter speaks volumes about the brilliance of his art.

Performances are all richly detailed, especially Bierbichler's and Monica Bleibtreu as the long suffering wife.

Schütte's dramatic snapshot of the artist three days before his death offers an interesting bit of speculation as to the issues Brecht faced as his life drew to a close.

This is a terrific character study, a probe into the life of a complex man.

There are no featured reviews for The Farewell at this time.