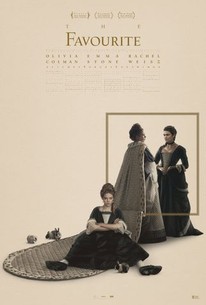 Early 18th century. England is at war with the French. Nevertheless, duck racing and pineapple eating are thriving. A frail Queen Anne (Olivia Colman) occupies the throne and her close friend Lady Sarah Churchill (Rachel Weisz) governs the country in her stead while tending to Anne's ill health and mercurial temper. When a new servant Abigail Masham (Emma Stone) arrives, her charm endears her to Sarah. Sarah takes Abigail under her wing and Abigail sees a chance at a return to her aristocratic roots. As the politics of war become quite time consuming for Sarah, Abigail steps into the breach to fill in as the Queen's companion. Their burgeoning friendship gives her a chance to fulfill her ambitions and she will not let woman, man, politics or rabbit stand in her way.

News & Interviews for The Favourite

View All The Favourite News

Critic Reviews for The Favourite

It's a dark view, but dark views, like sunny views, have to come from somewhere. Where is Lanthimos's dark sun? I don't know, but I'll definitely keep watching.

Yorgos Lanthimos' dryly funny historical feature is all about power, and that means literally wearing the pants in a strange time.

In the end, The Favourite is a haunting reminder of the limits of control.

Pushes the idea of the capricious monarch through the far reaches of comedy and almost into tragedy. Colman embodies sublimely the punch-drunk confusion of a woman unsure whether she's child or adult, plaything or puppet-master.

Weisz and Stone are both brilliantly witty and nimble, but Colman's performance is nothing short of sublime.

This is The Crown like you've never seen it before.

Yorgos at his zany peak, Amadeus via Kubrick, the royal court scenes from The Devils run blisteringly amok - blackbirds dancing on the tips of diabolical hat pins

There are moments when you feel like you're watching a spoof, but Lanthimos manages to keep the film's tone perfectly on the right side of bizarre, making it also pass legitimately as a historical drama.

[A] double chocolate and cream cherry cake of a film, served on the finest cinematic lace, chock full of arsenic.

While some viewers may argue with The Favourite's often cruel tone, no one finds any room to downgrade its acting and superb production values.

The Favourite is delightfully outlandish and uproariously funny.

Audience Reviews for The Favourite

A nicely done expose of what knife-in-the-back politics can happen while the boys are off fighting a war (the English, again, with the French!). In this one the ladies mix it up pretty damn good, dressed to the 17th century nines for their WWF cage match-up. The queen is a little addlepated upstairs and so requires some hands-on coaching, and so inadvertently setting up the battle to be her "best friend" in court. Rachel Weisz and Emma Stone are killer as the main event, but Olivia Coleman's Queen is like looking at one of those will-you-feed-this-hungry-child infomercials they show overnight. Wicked badger.

Whether you call yourself a fan of the films that Yorgos Lanthimos directs or not, itâ(TM)s without question that his movies arenâ(TM)t for everyone. They are pieces of art that not everyone can understand or are even willing to try understanding. So take my review of The Favourite with a large grain of salt because Iâ(TM)m someone who can get into anything, no matter what the subject matter is. That being said, The Favourite is one of the most unique films of 2018 and for that reason alone, will have me remembering it for quite some time. While I donâ(TM)t think The Favourite is perfect in any way, I do feel like certain film fanatics will eat this one up. Thereâ(TM)s a reason this film is circulating around awards season (deservedly so), but I personally believe it deserves the recognition and not a win. Set quite far into the past in England, The Favourite follows the servants of Queen Anne. As needy as she is invested romantically in her first hand servant, everything falls to pieces when a new one arrives in Abigail. Aside from a frowned-upon romance that does have a three-act structure throughout the course of this movie, my biggest complaint is that it felt a little light on story. There are other side plots and hints of backstory that are eluded to, but I felt a little short-changed when looking back on the filmâ(TM)s story as a whole. As I mentioned, The Favourite will be remembered for many reasons by film fans around the world, but I believe the story will be remembered far less than everything else this film has to offer. From the very first shot of this film to the time the credits rolled, I was enthralled by how impeccably filmed this movie was. It should come as no surprise when you have a cinematographer like Robbie Ryan at the helm. While I havenâ(TM)t seen a lot of films that he has worked on, I absolutely loved his work on both American Honey and Slow West. He has a keen eye for camera work and I canâ(TM)t wait to see what he does next. On top of that, the score present throughout this movie is incredibly engaging, to say the least. This is a very tight screenplay, with not very many breaths taken between lines of dialogueâ"but when there is, the score takes over in a majorly memorable way. Since weâ(TM)re on the topic of things to remember about this film, the cast is near perfect in every way. I normally donâ(TM)t say that about many movies, because thereâ(TM)s usually at least one casting choice that throws me off, but The Favourite is immaculate in that regard. From Emma Stone giving her all, to Rachel Weisz giving her best performance in years, to Olivia Colman as the Queen, I was either laughing hysterically or sucked in by a dramatic delivery. If for nothing else, this is a movie thatâ(TM)s worth seeing for the performances alone. Donâ(TM)t be shocked if you see this cast sweeping many of the female awards categories in the coming weeks. In the end, The Favourite is nearly perfect on a technical level, but the substance itself felt slightly lacking to me. The screenplay by Deborah Davis and Tony McNamara packs a heavy punch in terms of the dialogue throughout and I found myself remembering moments in David Fincher films where the dialogue flies a mile a minute, which are my favourite kind of screenplays. Overall, I canâ(TM)t say this is one of the best films of the year, like many critics are, but I can recognize that certain elements absolutely are. I had a great time watching this movie and certain viewers will as well. If youâ(TM)re not intrigued by the trailer for this one, I donâ(TM)t believe the movie will do a good job of winning you over.

A stinky mud of baroque malice, royal indecency and twisted intrigue makes this a deliciously diabolical period dramedy that may be more grounded in reality than Lanthimos's previous films and yet feels like a bizarre version of All About Eve, had it been penned by a perverse Jane Austen.

This film strangely bounces back and forth from a period piece to a parody, making it very unique in many ways, but holding it back in others. Since it never dives into its comedic side, this film doesn't claim any laugh out loud moments, and since it never fully embraces its dramatic side, the storyline involving the power struggle between Sarah and Abigail never feels fully fleshed out. Coleman, Weisz and Stone all do good jobs with their characters, and the strange blend of absurdity and historical accuracy is very interesting, but the screenplay feels a little too simple and falls short of this film's full potential.