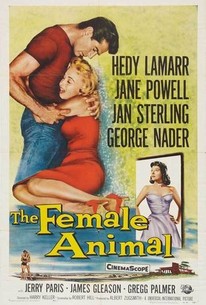 Harry Keller, the man who directed the extra scenes in Orson Welles' Touch of Evil, receives solo directorial credit in The Female Animal. Hedy Lamarr stars as Vanessa Windsor, a beautiful but ageing film star whose life is saved on the set by handsome extra Chris Farley (George Nader). Falling in love with Chris, Vanessa finds herself in competition with her own adopted daughter Penny (Jane Powell). Meanwhile, poor Chris struggles to become his "own man", and not merely the sexual plaything of two predatory females. Stealing the film from the nominal stars are Jan Sterling as a fading beauty with romantic notions of her own, and James Gleason as a crusty but likeable agent. ~ Hal Erickson, Rovi

Douglas Evans
as The Director

Critic Reviews for The Female Animal

Tawdry and salacious for its time, it's hardly the titillating extravaganza of Lamarr's signature role in 1933's Ecstasy.

A shallow and formula-ridden drama about life in Hollywood, with Hedy Lamarr as an "ageless" glamour-girl, Jane Powell as her rebellious daughter, and George Nader as a high-minded muscle-boy who is torn between them.

There are no featured reviews for The Female Animal at this time.