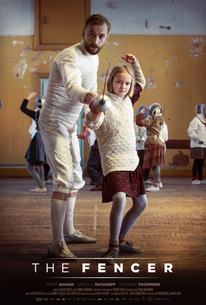 A young man, Endel Nelis, arrives in Haapsalu, Estonia, in the early 1950s. Having left Leningrad to escape the secret police, he finds work as a teacher and founds a sports club for his students. Endel becomes a father figure to his students and starts teaching them his great passion - fencing, which causes a conflict with the school's principal. Envious, the principal starts investigating Endel's background... Endel learns to love the children and looks after them; most are orphans as a result of the Russian occupation. Fencing becomes a form of self-expression for the children and Endel becomes a role model. The children want to participate in a national fencing tournament in Leningrad, and Endel must make a choice: risk everything to take the children to Leningrad or put his safety first and disappoint them.

Critic Reviews for The Fencer (Miekkailija)

It's surprising how polite and restrained everything is. However, that doesn't mean you won't be wiping your eyes as the credits start to roll.

Though the camera follows Endel closely, we never really get inside his head - or explore the fear, regret and uncertainty that must plague him.

The sincerity with which the clichés get served up, and so on, make a relatively smooth viewing experience. But they also render what would have been an at times harrowing real-life story into something safe and bland.

The Fencer works thanks in large part to a series of small moments that add up to a robust character study of both Endel and the town, filled with residents who are none too happy about being on the wrong side of the Iron Curtain.

The Fencer is a minor film, but a very effective one that is well worth checking out.

Above all, the film serves as a tribute to Endel Nelis.

It's the kids, as charming and scrappy a bunch as you'd find anywhere, who give The Fencer its winning edge.

The true story of an Estonian sports hero offers a lovely twist on a familiar tale. A cinematic triumph from a nation that's been missing from the global film stage.

Audience Reviews for The Fencer (Miekkailija)

There are no featured audience reviews yet. Click the link below to see what others say about The Fencer (Miekkailija)!