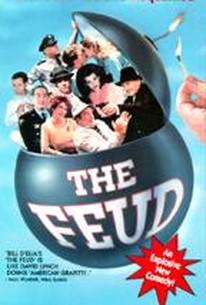 Based on a novel by Thomas Berger, The Feud is a lampoonish look at 1950s manners and mores. There is no love lost between the neighboring communities of Milville and Hornbeck. This is largely due to the animosity between two large and demonstrative families: the Bullards and the Bealers. In the tradition of the Hatfields and McCoys (and also Laurel and Hardy), minor irritations slowly escalate into all-out warfare. The humor is very dark at times, sometimes bordering on the "sick": this is Norman Rockwel as filtered by Hieronymus Bosch. Because the actors play their roles in a broad, slapsticky manner, The Feud is liable to turn off as many viewers as it attracts, but that's the peril of being a "cult film."

David Strathairn
as The Stranger

Lynda A. Clark
as Marie

Allen Kelman
as Man at Counter
View All

Critic Reviews for The Feud

Minor lampoon comedy of small town America during the 1950s.

There are no featured reviews for The Feud at this time.