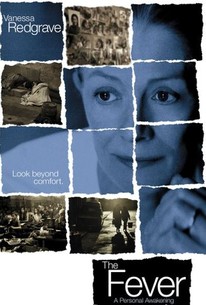 Director Carlo Gabriel Nero brings actor/playwright Wallace Shawn's controversial study of the growing chasm between the first and third world from stage to screen with this tale of a privileged woman whose reality suddenly suffers a profound shift. A bourgeois woman awakens suffering from a particularly intense fever and trapped in an unidentified third-world country. Later, upon venturing out into her war-torn surroundings, the once-wealthy woman is forced to contend with such unfamiliar issues as luxury, culpability, and revolution. Angelina Jolie, Joely Richardson, and Michael Moore co-star in a drama that employs animation and thought-provoking first-person monologues to explore the concept of bourgeois privilege.

Critic Reviews for The Fever

... ought to be more affecting than it is.

Audience Reviews for The Fever

Couldn't help it, "Jolie" made me realize was so many of us look up to her, and believed in her acting abilities.