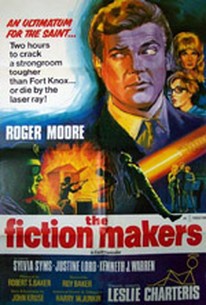 The Saint was a long-running (1963-1969) British TV series based on characters created by Leslie Charteris. Roger Moore stars as Simon Templar, a handsome soldier-of-fortune of dubious principles and morals, but a handy man to have around whenever someone truly deserving is in distress. The Fiction Makers originated as a two-part Saint adventure, first telecast as episodes #104 and #105 in 1968 then released theatrically as a feature film. This time, Templar is assigned to protect famed novelist Amos Klein from vengeful gangsters. The assignment turns out to be a pleasurable one when "Amos Klein" is revealed to be a gorgeous woman (Sylvia Syms). The Fiction Makers was written by John Kruse and Harry W. Junkin. ~ Hal Erickson, Rovi

Critic Reviews for The Fiction Makers

There are no critic reviews yet for The Fiction Makers. Keep checking Rotten Tomatoes for updates!

There are no featured reviews for The Fiction Makers at this time.