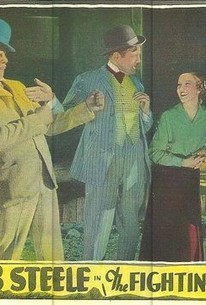 B-Western perennial Bob Steele made attempts at diversifying in 1933 by playing a circus acrobat in The Gallant Fool and a would-be boxer in The Fighting Champ, although, truth be told, never veering too far from the range in either. In The Fighting Champ, Steele plays Brick Loring, an itinerant cowboy who shows some promise as a prize-fighter. Crooked fight promoter Nifty Harmon (George Chesebro) attempts to bribe both Brick and his opponent Jock Malone (Charles King) to throw the match and although Brick only pretends to be interested, his backer, rancher Fred Mullins (Frank Ball), publicly accuses him of cheating. Mullins daughter Jean (Arletta Duncan), meanwhile, believes the young cowboy to be innocent and sets a trap for both Harmon and Malone.

Critic Reviews for The Fighting Champ

There are no critic reviews yet for The Fighting Champ. Keep checking Rotten Tomatoes for updates!

There are no featured reviews for The Fighting Champ at this time.