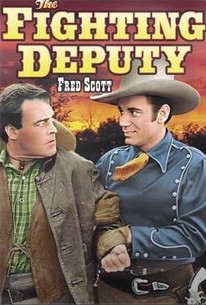 In between warbling Old Home Ranch and Yellow Mellow Moon (both by June Hershey and Don Swander), barytone cowboy Fred Scott goes after "Scar" Adams (Charles King), a notorious stage-robber who had almost killed his father, the sheriff (Frank LaRue). Scott's girlfriend and "Scar's" estranged sister (Phoebe Logan), meanwhile, refuses to marry him if he doesn't hand over his deputy badge, but when she changes her mind when her prospected father-in-law's body is delivered at the wedding ceremony. Assuming the mantle of sheriff after his slain father, Scott and comic sidekick Al St. John track down the killers. The Fighting Deputy marked the Scott series debut of veteran slapstick comic St. John, who played his usual character of "Fuzzy Q. Jones." A former star of the San Francisco Opera, Fred Scott had come to B-Westerns courtesy of his friend, producer Jed Buell.

Critic Reviews for The Fighting Deputy

There are no critic reviews yet for The Fighting Deputy. Keep checking Rotten Tomatoes for updates!

There are no featured reviews for The Fighting Deputy at this time.