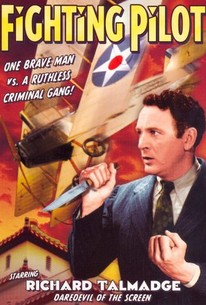 A daredevil pilot saves the inventor of a new airplane from a gang of thieves in this stunt-oriented melodrama starring Richard Talmadge. When F.S. Reynolds (William Humphrey) refuses to sell his newest airplane, crooked businessman Cardigan (Robert Frazer) has one of his henchmen (Rafael Storm) steal both the blueprints and the plane itself. Intrepid pilot Hal Fister (Talmadge) and his sidekick, Berty (Eddie Davis), trail the villains to Chinatown where Hal is captured. During his incarceration, the hero learns that Cardigan has hidden the plane in the desert, and after being rescued by Berty, he heads to the wilderness. After several scrapes with death, the villains are finally captured and Hal wins the hand of the inventor's grateful daughter (Gertrude Messinger).

Critic Reviews for The Fighting Pilot

There are no critic reviews yet for The Fighting Pilot. Keep checking Rotten Tomatoes for updates!

There are no featured reviews for The Fighting Pilot at this time.