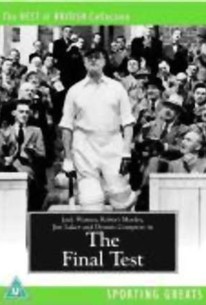 This British comedy centers around the game of Cricket. It is set as the British team and their legendary cricket player Sam Palmer, prepare for a big match with the Australians. It will be his swan song in the game. His son Reggie, a fledgling poet, must make a difficult decision. On one hand, he really wants to attend his father's final game, but on the other, he has also been invited to the home of world famous poet Alexander Whitehead. It is Whitehead who solves the dilemma as he is a Cricket fanatic. Together he and the boy speed off to the match. Actual Cricket players appear in the film. ~ Sandra Brennan, Rovi

Valentine Dyall
as Man In Black

Critic Reviews for The Final Test

A pleasant, although sometimes faltering, comedy from Britain...Robert Morley is very funny as a spluttery intellectual who takes the boy in hand.

This is a delightful film, a simple friendly film full of national jokes which, as no other country could possibly share them, give one the comfortable relaxed feeling of being at home and liking it there.

There are no featured reviews for The Final Test at this time.