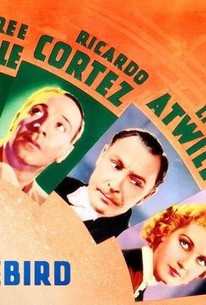 All but forgotten today, Warner Bros.' The Firebird was based on a once-popular stage mystery by Lajos Zilhany. Prohibited from seeing her actor sweetheart Herman Brandt (Ricardo Cortez) by her tyrannical parents, sweet young Vienesse lass Mariette (Anita Louise) defies authority by regularly visiting Brandt's downstairs apartment. The lovers' signal is a song called "The Firebird," which Brandt sings whenever he wants Mariette to visit him. When the actor is murdered, poor Mariette and her parents are prime suspects. But the truth is a bit more complicated than that, involving as it does a haughty aristocrat (Veree Teasdale), a powerful diplomat (Lionel Atwill) and a most unusual "candid camera" device.

Critic Reviews for The Firebird

The picture ends - as mystery pictures certainly should not - with worried head-shakings all round.

There are no featured reviews for The Firebird at this time.