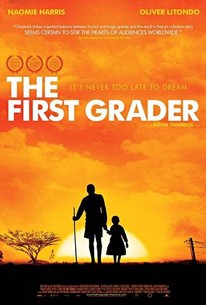 In a small, remote mountain top primary school in the Kenyan bush, hundreds of children are jostling for a chance for the free education newly promised by the Kenyan government. One new applicant causes astonishment when he knocks on the door of the school. He is Maruge (Oliver Litondo), an old Mau Mau veteran in his eighties, who is desperate to learn to read at this late stage of his life. He fought for the liberation of his country and now feels he must have the chance of an education so long denied - even if it means sitting in a classroom alongside six-year-olds. Moved by his passionate plea, head teacher Jane Obinchu (Naomie Harris), supports his struggle to gain admission and together they face fierce opposition from parents and officials who don't want to waste a precious school place on such an old man. -- (C) Official Site

Rosemary Nyambura
as Jacquie (P.A. to the Chairman)

Michael Oyier
as Newsreader
View All

News & Interviews for The First Grader

View All The First Grader News

Critic Reviews for The First Grader

The First Grader is a quietly educational experience.

This appealing mixture of contention and inspiration becomes a feel-good story that will make you shed a tear, then grin ear to ear.

Director Justin Chadwick's admirable effort manages to do more than inspire, educating auds with an important chapter in African history.

Seems to go on for ever and manipulates its audience in the most naïve of ways.

A predictable but inspiring story of an 84-year-old, one-time Mau Mau warrior, who insists on an education at a Kenyan primary school.

It's a complex scenario, but this movie winds up telling a straightforward, and slightly sucrose, heartwarming tale.

Those who have experienced Kenya or, for that matter, the African continent, will likely consider this a 'must see' cinematic experience.

The crucial authenticity that Chadwick so painstakingly wrought in his locations and filmmaking approach is completely undermined in the overly-sentimental -- frankly dishonest -- characterization of his protagonist.

With stellar performances, gorgeously authentic cinematography and a winning story, the fact-based feature "The First Grader" moves to the head of the class despite poor marks in some fundamental filmmaking areas.

What sounds like a festival-movie parody-it's Billy Madison meets Hotel Rwanda!-turns out to be a politically complex, emotionally charged history lesson.

An earnest "true story" that hits many of the expected importance-of- education grace notes, but never quite achieves a lump-in-your-throat reaction

Audience Reviews for The First Grader

Wonderful movie!! Inspiring. Heartfelt. Moving....and so continues my theory that some of the best movies are the ones that I have never heard of.... I found this a heart warming story, and much to be learned from. The main character's determination to realize his dream against all odds is truly inspiring. Makes me count my American blessings.

This true story of an 84 year old Kenyan man who, against all opposition, wants to make use of the new law of free education for first graders, is a perfect feel good movie. While the flashbacks into his past that by and by reveal his eventful back story and explain the motivation for his wish to learn reading also give a glimpse into the violent history of the country, this is not a political film. It is a story about the importance of education, dealing with your past and standing up for yourself. The performances are top notch and heart warming, especially the leading man Oliver Litondo and Naomie Harris as teacher are adorable. While the film does not avoid all stereotypes that come with such stories it is still enthralling, touching, beautifully filmed and very entertaining. The best stories are still those where bad things happen to good people but in the end everyone gets what they deserve.

The main (true) story here is not that a Kenyan octogenarian goes back to first grade, but the horrible hell he and his countrymen went through fighting off the British colonialist in the 1950s. This should be rated R because that hell is presented in a horrifying way. To those that say violence in movies make you numb: I love Kill Bill, I've seen it probably 7 times, and this movie disturbed me to a point where I wanted to walk out. But I'm glad I didn't.

From the director of The Other Boleyn Girl comes a completely different story; one about perseverance and fighting for what is right. After just studying the Mau Mau of Kenya and their struggles against the British in the 1960's for a school project, it's devastating to see it on the big screen. The flashbacks are vivid, violent and disturbing, but the rest of the story is extremely heart-warming and inspiring. Oliver Litondo and Naomie Harris are absolutely superb in their roles. Harris is so different here from her role in Pirates of the Caribbean as Tia Dalma. I would highly recommend this film because it conveys some very important messages, it is beautiful, extremely up-lifting and well-done.