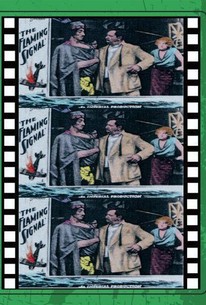 In this action adventure saga, a daredevil pilot must make a forced landing on a tiny South Seas island and finds himself in the midst of a native uprising. They are rebelling against an insensitive, opportunistic, and unscrupulous German trader who has tried to sully the reputation of a beautiful native girl. They are also angry with the other whites on the island who try to control them. The pilot, and his heroic dog Flash, attempt to save a missionary and his daughter. He succeeds in saving the girl, but the other whites are massacred. The dog plays a large part in the rescue.

Critic Reviews for The Flaming Signal

There are no critic reviews yet for The Flaming Signal. Keep checking Rotten Tomatoes for updates!

There are no featured reviews for The Flaming Signal at this time.