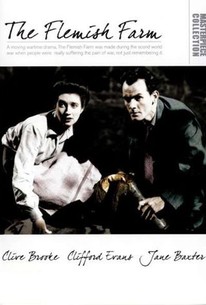 The Flemish Farm is based on a true story. Clifford Evnas plays Duclos, a Belgian airman who joins the British air corps at the outbreak of WW2. Feeling the need to do something more for his country than merely dropping bombs on Nazi installations, Duclos flies back to his German-occupied homeland to symbolically retrieve a Belgian Air Force flag he'd buried just before evacuating. He hides out in the farm of the title, where he is given aid and support by the Belgian underground. Ultimately, however, his presence becomes known to the Nazis, leading to a tension-filled denouement. Jane Baxter costars as Trescha, who in true WW2-propaganda fashion gives her life for her cause.

Irene Handl
as Frau
View All

Critic Reviews for The Flemish Farm

There are no critic reviews yet for The Flemish Farm. Keep checking Rotten Tomatoes for updates!

There are no featured reviews for The Flemish Farm at this time.