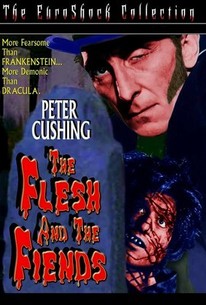 Mania is the venerable Burke and Hare story, previously cinematized by producer Val Lewton as The Body Snatcher. Peter Cushing plays a respectable 19th-century Edinburgh doctor who needs fresh cadavers in order to continue his crucial research. Since the exhuming of bodies for medical purposes is illegal, Lee must rely upon grave-robbers George Rose and Donald Pleasance for his corpse supply. What Lee doesn't know is that Rose and Pleasance frequently cut out the middleman by "creating" their own corpses. The good doctor catches on when the latest cadaver turns out to be his own fiancee. Its excessively violent climax has prevented Mania from being shown completely intact on commercial television. ~ Hal Erickson, Rovi

Critic Reviews for The Flesh and The Fiends

Audience Reviews for The Flesh and The Fiends

This is a pretty good attempt at a "body snatcher" flick, but it could be a lot better. Cushing plays a creepy looking guy, but that's not enough for a good horror movie.

Enjoyable little romp, though the fact that it's based on a true story makes it all the more interesting. It's sort of a cross between Frankenstein and Sweeny Todd. Now I have to check out the John Landis version (Burke and Hare) which stars Simon Pegg & Andy Serkis in the title roles and has Tim Curry as the infamous doctor! That coud be fun!

The Flesh and The Fiends Quotes