The Flight of the Intruder1991 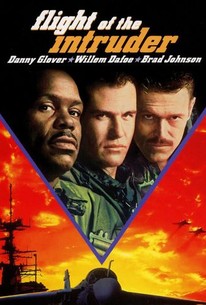 The Flight of the Intruder Videos

The Flight of the Intruder Photos

Two pilots go against the rule book in a bid to win the war in Viet Nam in this speculative military drama. Lieutenant Jake Grafton (Brad Johnson) is a U.S. Navy pilot stationed aboard an aircraft carrier after the death of his one-time flying partner Morgan McPherson (Christopher Rich), who perished during a recent, ill-advised mission. Lt. Grafton, who has become cynical about the current state of military affairs, is convinced that if the war were left to the soldiers rather than the politicians overseeing the Pentagon, United States victory would be swift and assured. Grafton shares this opinion with Virgil Cole (Willem Dafoe), a supremely confident new pilot under his command, and together they commandeer an A-6 Bomber, known as The Intruder, for an unauthorized bombing raid against Hanoi. The city had been declared off-limits because it was believed that it would have a negative impact on the Paris peace talks, so the raid lands Grafton and Cole in hot water. However, when the talks break down, President Richard Nixon authorizes the pilots to lead a new strike against Hanoi with everything they've got. Ving Rhames and David Schwimmer both appear in small roles that predated their respective rises to fame (in fact, this was Schwimmer's first movie). ~ Mark Deming, Rovi

Critic Reviews for The Flight of the Intruder

It's a strangely disconnected movie that leads up to a point, makes it, and then drones on for another 45 minutes in increasingly witless cliches.

Less entertaining than any of the leads have ever done.

Audience Reviews for The Flight of the Intruder

There are no featured audience reviews yet. Click the link below to see what others say about The Flight of the Intruder!

The Flight of the Intruder Quotes