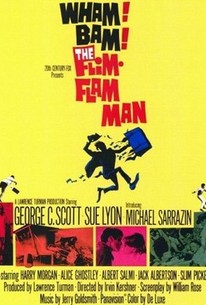 Michael Sarrazin plays Curley, a young man gone AWOL from the Army who soon makes the acquaintance of Mordechai (George C. Scott), a veteran confidence man. Mordecai takes a liking to Curley, and offers to show him the tricks of the trade as they drift through the American South, pulling one scam after another. But when Curley meets Bonnie Lee Packard (Sue Lyon), romance rears its head and Curley decides to go straight. Mordecai is not so easily convinced to leave his trade behind, however, and when a car theft goes spectacularly wrong and Mordecai ends up in jail, Curley has to pull a fast one to got his pal out of stir. The Flim Flam Man also features a host of notable character actors, including Slim Pickens, Alice Ghostley, and Strother Martin.

Critic Reviews for The Flim-Flam Man

There are also some nicely directed scenes in which Scott gradually overcomes the suspicions of his victims... But, in the end, Scott doesn't quite come off as the flim-flam man.

Rogues and scoundrels are not really lovable except in fiction, plays and movies, and then only in proportion to the quality of the work. I am happy to report that The Flim-Flam Man, all about a confidence man, has the necessary quality.

In keeping with their shifty con tricks, the characters stay on the move

There are no featured reviews for The Flim-Flam Man at this time.