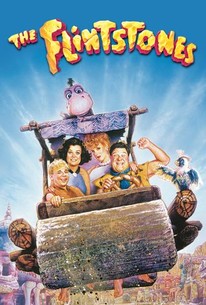 The good (if not fully evolved) citizens of Bedrock make their way to the big screen in this live-action adaptation of the popular animated series of the 1960s. Fred Flintstone (John Goodman) and his best friend Barney Rubble (Rick Moranis) work together at the Slate and Company Rock Quarry. When Fred loans Barney some money that allows him and his wife Betty (Rosie O'Donnell) to adopt a child, Barney is looking for a way to show his gratitude. Barney thinks he's found one when the executives at Slate and Company announce that they're giving all their employees intelligence tests to help determine future promotions. When Barney switches his high-scoring test with Fred's, his plan works -- but not quite the way he had hoped: Fred is deemed executive material and given a big promotion, complete with a sexy secretary (Halle Berry) who makes his wife Wilma (Elizabeth Perkins) jealous, while Barney is soon out of a job and can't pay his bills. Bill Hanna and Joseph Barbara, who created the original television series, make cameo appearances here; Elizabeth Taylor gives a fine comic performance as Wilma's nagging mother, and Harvey Korman provides the voice of the Dictabird. ~Rovi

Harvey Korman
as Voice of Dictabird

Kate Pierson
as Herself

Fred Schneider
as Himself

Keith Strickland
as Himself

Mel Blanc
as Voice of Dino

Lita Stevens
as Woman at Chevrox

Joseph Barbera
as Man in Mersandes

William Hanna
as Executive in Boardroom
View All

News & Interviews for The Flintstones

View All The Flintstones News

Critic Reviews for The Flintstones

Once again, prehistory has been good to the film's producer, billed here as Steven Spielrock.

Our Flick of the Week is "The Flintstones," and unfortunately, much less thought has been put into this screenplay than into the production design and publicity campaign for this profoundly dull enterprise.

While the movie may act like a madeleine for television-obsessed baby-boomers, it works even better as a colorful playland that will appeal to small children.

It's just a series of nicely shot and over-bright sets with the cast blocking your view of the background.

Maybe it's because so many of the things they do in the movie are lifted directly from the show, but a lot of stuff seems stale.

Just watching it is fun. Following the plot is not so much fun.

The 32 scriptwriters' idea of a joke is to suffix every name with rock. The opening title announces the film as a "Steven Spielrock" production. And it's downhill from there, with an avalanche of rubbish at our heels.

Someone, somewhere gave the keys to the kingdom to director Brian Levant, whose leaden ways with screen comedy are amplified in this unfunny, hyperactive translation of a property that's best served through animation.

Rich Cline
Shadows on the Wall
View All Critic Reviews (45)

Audience Reviews for The Flintstones

The Flintstones was one of those films that I really enjoyed when I was younger. Years later, however the film doesn't hold up. I found that despite the two lead roles (which were well casted), the film didn't have anything good to offer. The plot seems a bit too complex for children, and I remember not fully understanding the film when I was younger. The film suffers from quite a poor plot, and it's the main reason why this film misses the mark. The film does have a highpoint, the film looks great and that's about it. The films sets look stunning. However aside from John Goodman and Rick Moranis, the actors here are terrible. A live action adaptation of the classic TV show wasn't the best idea, and the end result of this film showcases that point perfectly. The film tries to have a serious plot to add to its already silly plot, and it doesn't work. Director Brian Levant proves once again he's a sloppy director and can't craft an excellent family film. The Flintstones is a very forgettable family film, and it joins the countless awful family films that has plagued cinema in the last two decades. There are some great family films that are still watchable today, however, this one doesn't stand out, and it's laughably bad. The Flinstones is the type of film that when you're a kid, you enjoy, however when you grow up, you ask yourself "Why did I even like this crap?" This is a pointless film that might have been good, but is ruined by an awful script, bad directing and sloppy acting. Avoid this film. There are so many better family films out there.

Not a good companion to the funny tv series. The plot and humour is its main flaw.

Barney Rubble: You know, Fred, I hear that eatin' too much red meat is bad for you. Fred Flintstone: What a load of bunk! My father ate it every day of his life and he lived to the ripe old age of thirty-eight. "Yabba-dabba-doo it." Probably one of the worst and most brutal family movies I've ever sat through. I watched the whole thing, but I hated myself for every wasted second. This movie is made for the Rosie O'Donnells of Hollywood; not for Rick Moranis, John Goodman and Elizabeth Perkins. This movie is so far beneath the three of them. It's a disaster from start to finish and there is no possible way the makers of this movie could have thought this was going to turn out good. If you like your jokes to be about rocks, stones and slate then this is your movie. But know what you're getting yourself in for because every joke is about rock, stones and slate. That's it, nothing else, besides the most annoying quote in the world from Fred Flintstone. I really don't think many kids would find this all that entertaining either. If I had watched this when I was a kid, I know I wouldn't have liked it.

I gotta be honest and say that I didn't even like this when I was a kid, but looking at it many years later, I'm kind of fascinated with it. I'm fascinated that a production from Steven Spielberg featuring special effects by Industrial Light & Magic AND creature effects by Jim Henson's Creature Shop AND featuring cameos by Sam Raimi and Chris Rock was ever made in the first place. Not only that, but it isn't the typical sort of cut and dried family entertainment you'd expect it to be. It contains some adult content with lots of innuendos. They aren't an enormous deal but you don't expect them in this type of a movie. The cast is hit and miss (???Rosie O'Donell as Betty???), but I'd say this was well-executed. It's by no means perfect, but it's actually craptastic in my eyes. It's fun, but don't expect anything mind-blowing or particularly grand. It is what it is, and it's much better than I give it credit for.